Since he retired in 2013, Samaraweera has held various coaching assignments.

Former Sri Lanka batsman Thilan Samaraweera has been roped in to work with New Zealand during their Test tour of the country next month.

Samaraweera, who averaged 48.76 from 81 Tests, with 14 hundreds, will assist New Zealand’s batsmen as part of the team’s coaching staff for the two-match series that starts from August 14. He will work closely with Peter Fulton, the former New Zealand opener who has taken over from Craig McMillan as batting coach.

Since he quit international cricket in 2013, Samaraweera has held various coaching assignments around the world. These include being batting coach of Sri Lanka and Bangladesh and fielding coach of Kolkata Knight Riders during the 2018 IPL.

Samaraweera was named Sri Lanka’s batting coach in 2017 and held the post until the end of the World Cup this month.

“We’re delighted to welcome Thilan into our environment for the Test phase of the tour,” he said in a statement Tuesday. His knowledge of Sri Lankan conditions will be invaluable and he’ll offer great assistance to Peter Fulton on his first tour. Having an extra support coach worked really well for us at the World Cup where we had Luke Ronchi on board, and we’re sure Thilan will also offer a lot to the group.”

New Zealand fly to Colombo this weekend before they begin their first assignment of the new World Test Championship.

In 15 Tests played in Sri Lanka dating back to 1984, New Zealand have won four, lost six and drawn five. 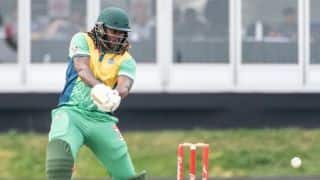