The official closing time is 6 pm but because of heavy rain the ground was flooded.

The Play has to be called off for the Third day of first Test between Sri Lanka and Pakistan at Galle due to heavy rain. Though the official closing time is 6 pm but because of heavy rain late in the day, the ground was flooded and no more play is possible today. Sri Lanka just lost one wicket in the whole day and is in the driver’s seat. Pakistan will have to take early wickets at the start of fourth day to get back in the game.

Earlier rain has stopped the proceedings couple of time before at Galle. A sharp shower has descended after Lunch and the ground was under cover. 35 minutes was lost at that time.  After the brake players resumed play, but after few overs it was raining again.  The players went back but it was a short delay. But they were not third time lucky as the third delay came before the tea and it was raining heavily. The tea session has been extended and finally it was called off at 4.32 local time.

Meanwhile Kumar Sangakkara’s good form continues as he reached his 37th century in Test match cricket. Now he has the record of most hundreds against Pakistan (10). In terms of Test hundreds he has gone past Rahul Dravid and fourth on all time list. Only Sachin Tendulkar, Ricky Ponting and Jacques Kallis above him. Sangakkara celebrated this moment with his best mate Mahle Jayawardene.

Kaushal Silva’s fall was the only success for Pakistan on the third morning as Kumar Sangakkara was rock solid at the crease. Jayawardene and Sangakkara made another 100 run partnership among them. At lunch on Day 3 of first Test against Pakistan at Galle, Sri Lanka is in a comfortable position. They reached 174 for the loss of two wickets.

Sri Lanka started the morning session carefully. Both the overnight batsmen reached their half centuries. Kaushal Silva who opened the innings reached his half century first. Sangakkara reached his half century in the 45th over. After playing 123 balls he reached this milestone. After the wicket of Kaushal Silva Jayawardene came to the crease with a massive reception by the crowd and the Pakistani players and started batting aggressively against the Pakistani spinners, specially Saeed Ajmaal.

Though Jayawardene, in his second last Test gets a big reprieve. He was declared leg before wicket by the on field umpire Ian Gauld, but when he challenged this decision, it was overturned by the third umpire. But after that both Sangakkara and Jayawardene played risk free cricket and put Sri Lanka in the driver’s seat after day of the Test match. Though it is looking like the match heading towards a draw. But cricket is an unpredictable game. It can surprise you anytime. 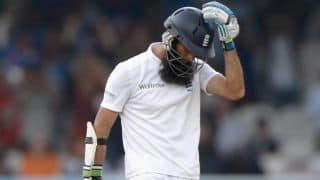