The Lankans lost the fabulous pair of Jayawardene and Sangakkara followed by Thirimanne.

Sri Lanka reached 234 for the loss of five wickets after 90 overs at the end of the first session against Pakistan on the fourth day of the second and final Test at the Sinhalese Sports Club in Colombo. Angelo Mathews and Niroshan Dickwella were at the crease batting at 24 and 13 respectively while Saeed Ajmal emerged the highlight among the Pakistani bowlers by picking all the three wickets in the morning session.

The day began on a colourful note as the stadium was decorated in the maroon and white, the official colours of Mahela Jayawardene’s alma-mater Nalanda College. Jayawardene and Kumar Sangakkara walked down to the ground amidst loud cheers from the stands and the fans were expecting the two to add a few more records to the game during their stay at the crease. The duo completed their 19th century partnership, which is just one shy of the all-time record held by Rahul Dravid and Sachin Tendulkar, in the second ball of the day itself. Jayawardene brought up his 50th Test half century when he swept Ajmal for a four in the 65th over, leading to wild celebrations all over the ground.

After Sangakkara’s dismissal in the fourth over of the day, the fans were praying for a Jayawardene century, which would have been  a dream farewell for the batting veteran who has registered eleven of his 34 Test centuries at this venue. But fate unfortunately had different plans in store as he mistimed an Ajmal delivery and sent it high up the sky to get caught by Ahmed Shehzad at mid-wicket. His final walk back to the pavilion in Test cricket was an emotional one as the entire stadium was on its feet and applauded him for his well-paced innings as well for his contribution to international cricket.

Angelo Mathews and Lahiru Thirimanne suddenly found themselves with the major task of building a partnership and initiate the recovery process for the hosts. With two new faces at the crease, the visitors had a great opportunity to get themselves back into the game and even get rid of the rest of the Lankan team. Ajmal did manage to strike yet again, this time bowling a brilliant ‘doosra’ outside off-stump that Thirimanne completely missed causing his off stump to get unsettled.

Mathews and Niroshan Dickwella have to preserve their wicket for the rest of the day if they intend to return to the position that they were in before the flurry of dismissals in the morning. While the game is in a great balance and can go either way with one and a half days still left, Pakistan will bank on their chief destroyer Ajmal to utilise the weary pitch to bamboozle the rest of the batsmen. 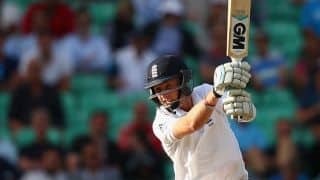