Mahela Jayawardene bowed out of Test cricket after getting dismissed by Ajmal.

Sri Lanka batting maestro Mahela Jayawardene played his last international Test innings against Pakistan at his favourite hunting ground of Sinhalese Sports Club at Colombo, scoring 54 runs from 137 balls before he mistimed a Saeed Ajmal delivery to get caught a mid-wicket by Ahmed Shehzad.

The veteran had resumed from his overnight score of 49 along with long-time friend Kumar Sangakkara. He reached his half-century in a matter of no time and  the fans were praying for a century, which would have been a fitting farewell for the legend. Sangakkara couldn’t stick for long as he got caught by Azhar Ali at silly point. While the sadness of not seeing the two bat together in Test cricket again was starting to settle in the minds of the spectators, the crowd was in for another blow.

Jayawardene tried to open up the attack against Ajmal by coming down the track and smash him over mid-on, he ended up skieing the delivery for Shehzad to catch from his position at mid-wicket. Jayawardene, who had survivied a dismissal scare off the bowling of Wahab Riaz barely a few minutes earlier, couldn’t make the most of the opportunity his luck decided to bestow upon him to complete a three-digit score.

The SSC, which was adorned in the colours of maroon and white, the official colours of his alma mater Nalanda College, was in a state of shock but nevertheless gaving him a standing ovation as he walked back to the pavilion with his bat raised.

Jayawardene retires with the status of being one of the greatest batsmen Sri Lanka has ever produced. The elegant right-handed batsman from Colombo is the most capped Sri Lankan player in Test cricket with 149 international appearances, scoring a massive 11,814 runs at an average of 49.84. 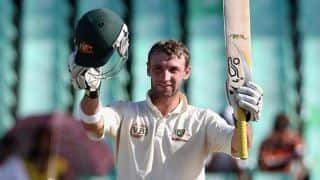