The live streaming of the match is available here, in case you don't have a working TV set nearby.

Sri Lanka and Pakistan face off in the fifth and final One-Day International (ODI) at the Mahinda Rajapaksa International Stadium in Hambantota on Sunday. Pakistan are currently leading the series 3-1, having conquered the fourth game by a comfortable margin of seven wickets at Colombo, and will look to extend the margin to 4-1 by the end of the series. Sri Lanka, on the other hand, will target the consolatory victory in order to give their fans something to cheer about, and gain some confidence ahead of the Twenty20 International (T20I) series that follows, as well as the series against India who are to arrive in August. LIVE SCORECARD: Sri Lanka vs Pakistan 2015, 5th ODI at Hambantota

Sri Lanka clambered their way to a score of 256 for nine, with contributions from Lahiru Thirimanne (95) and Tillakaratne Dilshan (55) preventing them from getting bowled out for a sub-par score. The bowling unit however, once again failed to delivery as the Pakistanis managed to chase the moderate target down with 55 balls to spare. Ahmed Shehzad (95) and Mohammad Hafeez (70) laid the foundation for the chase with their knocks. The Sri Lankan bowlers were once again left clueless, with Sachith Pathirana conceding as many as 81 runs in 10 overs. LIVE UPDATES: Sri Lanka vs Pakistan, 5th ODI at Hambantota

Catch the live streaming of the fifth ODI between Sri Lanka and Pakistan on tensports.com, and the live telecast of the match on Ten Cricket and Ten HD.

Live Streaming is a concept that has caught on like wild fire across the globe, owing to advancements in technology. Online streaming allows for convenient access to cricket from any part of the world. Live streaming has effectively eliminated the need for a television. 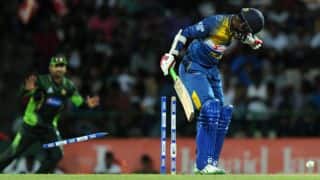