Skipper Angelo Mathews steadied Sri Lanka with a watchful unbeaten 31 after Pakistan had scalped the top order cheaply in the series-deciding third and final Test in Pallekele on Sunday. The hosts, who gained a first innings lead of 63 runs, recovered from 35 to three to post 112-4 in their second knock by tea on the rain-interrupted third day. Live Updates: Sri Lanka vs Pakistan, 3rd Test, Pallekele, Day 4

Mathews put on 45 for the fourth wicket with Upul Tharanga (48) and 32 for the undefeated fifth with Jehan Mubarak (nine) to increase the lead to 175 runs with six wickets in hand. The tourists added six runs to their overnight score of 209-9 before they were all out for 215 in the day’s second over in reply to Sri Lanka’s first innings total of 278. Live Scorecard: Sri Lanka vs Pakistan, 3rd Test, Pallekele, Day 4

Catch the live streaming of the Third Test between Sri Lanka and Pakistan on tensports.com, and the live telecast of the match on Ten Cricket.

Live Streaming is a concept that has caught on like wild fire across the globe, owing to advancements in technology. Online streaming allows for convenient access to cricket from any part of the world. Live streaming has effectively eliminated the need for a television. However, one must be cautious when looking for live streaming of matches as there are plenty of malicious websites, disguised as live-streaming outlets, waiting to infect your computer with unwanted material. Use only authentic sources for live streaming. 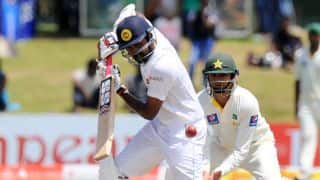