Pakistan finished Day Two of the third Test at 202 for eight against Sri Lanka at Pallekele.  Pakistan still trail Sri Lanka by 69 runs. Azhar Ali too played his part with a well paced 52, before he was dismissed by Nuwan Pradeep. Live Scorecard: Sri Lanka vs Pakistan, 3rd Test, Pallekele, Day 2

Pakistan made a decent start to their innings but lost both the openers, Shan Masood and Ahmed Shehzad for 13 and 21 respectively. Younis Khan was run out by Kaushal Silva after a direct throw to the non-striker’s end when Younis was looking for a quick single. Pakistan were reeling at 45 for three at the end of the first session. Live Blog: Sri Lanka vs Pakistan, 3rd Test at Pallekele, Day 2

Azhar and Asad Shafiq resumed the second session with positive intent. they put on a 50-run stand for the fourth wicket. But with Shafiq dismissed, Azhar had to kick on and get a big score once again. He was then joined by Sarfraz and he was looking to take on the bowling immediately. Azhar finally got to his 20th Test fifty but was soon dismissed after that for 52 after he chased a ball outside off, which was safely pouched at the slip cordon. 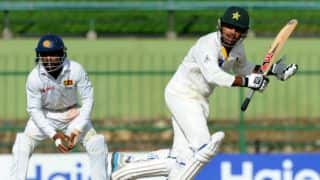