Catch all the live score and updates from the first day of the first Test between Sri Lanka and Pakistan here.

(Pakistan aim to topple Sri Lanka in their own backyard in the two-Test series. Catch live cricket score and live updates of the match here)

Pakistan 261/4 | Overs 88
Y Khan 133(228), A Shafiq 55(110)
Stumps: Three wickets in the first session, only one in the next two. That pretty much sums up how Pakistan have fought back and the hero has been Younis Khan. Everything went his way today. Given out twice and survived both thanks to DRS. The Lankans tried hard but just couldn’t get him. Asad Shafiq has batted well for his ninth fifty.

Younis Khan now involved in 100-run partnerships 51 times, the most by any Pakistan batsman. He goes past Miandad (50). WR: Dravid (88)

Younis and Asad have batted 8 times together. Four times they put 100-plus partnerships, two of these were 200-plus!!

Younis has gone past Mohammad Yousuf

Pakistan 250/4 | Overs 84
Y Khan 127(218), A Shafiq 50(96)
Ninth Test fifty for Asad Shafiq. The partnership is inching closer to 100. Looked tentative at the start but has been free-flowing in the last session. Pakistan look set to end Day One on a high.
Pakistan 240/4 | Overs 81
Y Khan 110(195), A Shafiq 34(65)
Sri Lanka have taken the new ball. Shaminda Eranga starts delivers a tidy over. Younis is still holding the innings together and needs to see max 10 overs in the day.
Pakistan 217/4 | Overs 75
Y Khan 110(195), A Shafiq 34(65)
The partnership has gone beyond 50 between Shafiq and Younis. Good stand between the two since Misbah’s dismissal. Pakistan still hold the edge. Shafiq has shown excellent temperament against the spinners.

Younus Khan now has a Test 100 in 10 countries, including UAE, but except Australia (highest is 87) #SLvPak

Pakistan 198/4 | Overs 71
Y Khan 100(181), A Shafiq 25(55)
Excellent innings from Younis Khan. This is his 29th Test hundred and the second at Galle. He is just one ton behind equaling the record for most tons by a Pakistani. Inzamam leads the list with 25.
Pakistan 192/4 | Overs 69
Y Khan 98(174), A Shafiq 21(50)
Younis is inching closer to his second hundred at Galle. Shafiq has given good support to his senior partner. Since the dismissal of Misbah, Sri Lanka have not been able to dominate the proceedings. Dark clouds are slowly gathering over the ground.
Pakistan 183/4 | Overs 64
Y Khan 91(164), A Shafiq 19(30)
Younis is stuck on 90 for a while now. But Herath is certainly creating enough pressure with his variation. The plan was to corner Shafiq and he has done well to come down and hammered Herath over mid-on. The next ball he rocks on to the backfoot and smashes past covers for four. Picked up the length very early.
Pakistan 156/4 | Overs 58
Y Khan 84(155), A Shafiq 0(2)
Big wicket for Sri Lanka. Misbah charges and looks to hit over mid-on and Herath gets just enough turn to get the edge and cleanly caught by Dickwella behind the wickets. The 100-partnership comes to an end and the Lankans are right back in to this. Asad Shafiq is the new man in.
OUT! Misbah c Dickwella b Herath 31(100)
Pakistan 156/3 | Overs 57
Y Khan 84(155), Misbah 31(96)
100 partnership between the two. Pakistan have started on a positive note post tea. This is the 10th 100+ stand between Younis and Misbah in 30 innings together.
Pakistan 140/3 | Overs 54
Y Khan 77(146), Misbah 22(87)
Tea: They average close to 70 in their partnerships and it’s not a different story today. Misbah and Younis once again rescue the team. The partnership is worth 84 now. Sri Lanka will be fretting to get any one of these. They got Younis twice only to run in to the DRS which saved him. Interesting last session ahead. If these two still grind the bowlers in the last session, it’s advantage Pakistan.
Pakistan 135/3 | Overs 53
Y Khan 74(142), Misbah 20(85)
This is turning out to be Pakistan’s session. Though the runs have not flowed but they haven’t lost any wickets. Younis with a bag of luck has given the momentum while Misbah is still on defense at the other end.
Pakistan 122/3 | Overs 47
Y Khan 69(126), Misbah 12(65)
Dropped! Younis was looking to reverse sweep Perera and Jayawardene saw it coming from the slips. He moved to his right and had placed himself in right position for that catch but popped out of his hands. Considering that he had anticipated it, this should’ve been caught easily.
Pakistan 111/3 | Overs 45
Y Khan 60(117), Misbah 10(62)
Younis Khan survives once again. For the second time DRS saves him. Perera comes round the wicket and angles it across. It pitches on off-stump and turns in to him and raps him on the pads. That looked plumb and the umpire thought so as well. But the replays showed the ball was somehow missing the top of the bail.
Pakistan 96/3 | Overs 41
Y Khan 51(101), Misbah 5(54)
Younis Khan is increasing the scoring rate. He is taking on Dilruwan Perera. Consecutive boundaries on the first three balls. The first one is swept precisely past square-leg, the next one he came down the track and lofted over mid-on. The third one is worked through covers for four more. The fourth ball is neatly placed for a couple and he brings up his 29th Test fifty.
Pakistan 72/3 | Overs 36
Y Khan 25(81), Misbah 5(44)
Second ball of the 36th over by Dhammika Prasad is hit for a four by Misbah. That will wake everyone up.

Pakistan 64/3 | Overs 33
Y Khan 25(75), Misbah 1(32)
Misbah took 18 balls to get off the mark. Pakistan are crawling here. Rangana Herath has been on target against Misbah further tying him down.
Pakistan 59/3 | Overs 28
Y Khan 21(66), Misbah 0(11)
Angelo Mathews started after lunch and bowled a maiden over. Shaminda Eranga is brought in for the second spell from the other end. He is on target and one more maiden. Pakistan still looking for first runs after lunch.
Pakistan 59/3 | Overs 26
Y Khan 21(54), Misbah 0(11)
Lunch: Looks like a deja vu for Pakistan. A poor start and it is now up to Younis and Misbah to fight it out. Excellent performance from Sri Lankan bowlers after losing the toss. Dhammika Prasad was accurate and go the openers at the start until Rangana Herath once again spun his magic to pick the third wicket. Session 1 of the series goes Lanka’s way.
Pakistan 59/3 | Overs 25
Y Khan 21(54), Misbah 0(5)
Confusion and eventually Younis Khan survives. Prasad pitched this at a good length and Younis was beaten all ends up. A loud appeal and the umpire raises his finger. Younis is not amused and opts for a review. After the replays the umpire indicated that he was checking for the caught behind and not leg-before. Younis had not edged it and the ball had clipped the top of the pad.
Pakistan 56/3 | Overs 22
Y Khan 18 (41)
BIG WICKET! Rangana Herath strikes to remove Azhar Ali, the only Pakistan batsman who looked comfortable out there in the middle. Herath bowls one outside the off-stump, drawing the batsman forward. Ali gets an edge and ‘keeper does the rest.
OUT! A Ali b Herath 30 (69)
Pakistan 45/2 | Overs 17
A Ali 26 (49), Y Khan 11 (31)
Pakistan continue to make steady recovery as Sri Lanka have deployed their spinners. The ball is not moving as much as it was earlier in the day. Younis Khan still looking a little rusty.

Earlier in the day…

Gaurd of honour for @MahelaJay and folkowed by fire works as SL take the field pic.twitter.com/F6Sbhqm0Ee

Pakistan 34/2 | Overs 12
A Ali 23 (35), Y Khan 4 (15)
Both Younis Khan and Azhar Ali are looking comfortable in the middle with the ball moving around dangerously at times. Pakistan steady after the shaky start.
Pakistan 19/2 | Overs 6
A Ali 12(12), Y Khan 0(2)
One more down, Sri Lanka are dominating the proceedings. This was full and coming in to Khurram Manzoor and he is given out leg-before. Long thought about the decision referral but eventual decides against it. Dhammika Prasad has picked both the wickets to fall this morning.
OUT! K Manzoor lbw Prasad 3(19)
Pakistan 4/1 | Overs 1.3
K Manzoor 0(6)
There’s the first wicket! Dhammika Prasad draws the first blood for his side as Ahmed Shehzad gets a thick inside edge and is bowled. Pakistan make a scratchy start as they lose their first wicket in the second over of the match.
OUT! A Shehzad b Prasad 4(3)

Toss: Pakistan have won the toss and have elected to bat

Hello and welcome to CricketCountry’s live blog of the first day of the first Test between Sri Lanka and Pakistan at Galle. I am Devarchit Varma and I’ll be bringing the live updates of the match. After a defeat to South Africa for the first time on their home soil in 21 years, the Lankan side will be eager to fight back and restore their pride. Meanwhile, the Pakistan side is a new one with Misbah-ul-Haq and Younis Khan being the senior pros in an otherwise young batting line-up.

Pakistan are without most of their experienced pacers. Junaid Khan is the certainty. Mohammad Talha, Wahab Riaz and Rahat Ali being the other options. They have two veterans in Saeed Ajmal and Abdur Rehman in the spin department. The Lankans though have a deadly weapon in Rangana Herath who tormented them in UAE last year.

The weather has been playing tricks with rain delaying the start of play. But the spectators are least worried about that. The crowd have gathered with huge posters of Mahela Jayawardene who is playing his final Test series before hanging up his boots. A legend and and hero for the Lankans is about to bid adieu and he is sure to hog the limelight all through the series.

The conditions have been overcast and it won’t be a surprise if the captains will be eager to bowl first. 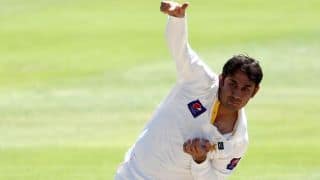