Catch Live Updates of the first day of 2nd Test between Pakistan and Sri Lanka here.

Stumps Day 1: They started poorly but Pakistan end right on top with key wickets. And it couldn’t have ended better with the wicket of their skipper Angelo Mathews.

Pakistan have struck back well. They take the new ball and Junaid Khan bags two wickets. He traps Niroshan Dickwella leg-before for 24 and then sends back Dilruwan Perera.

Excellent bowling from Junaid Khan. He toiled hard and kept his patience. COmes over the wicket and Thirimanne was needlessly hanging his bat outside off. The ball straightened a bit and a simple caught behind chance for Sarfaraz.

200 up for Sri Lanka. A slow progress considering that the pitch is not offering much assistance. Ajmal though has continued to pose questions. Nine overs to go before the new ball is available. Lanka would be aiming for ending the day with six wickets in hand.

Mathews was on zero for a long time but that’s the mark of a batsman in form. He was happy to work the ball away and bide his time. The pitch still doesn’t have anything for the spinners except the odd ball turning. However, Lanka have not scored much.

What a beauty !!!! Azhar Ali you beauty !!! Pakistan quitely getting on top here!!

One more down, Sri Lanka are losing their way. You can call it an unlucky dismissal for Tharanga but Pakistan have created their fortunes. Tharanga neatly flicked this right off the middle of his bat and Azhar Ali at shortleg caught it brilliantly. More than reflex the ball travelled straight in to him and he managed to hold on to it. Tharanga misses out on a well deserved ton.

No fairytale finish for the local hero Mahela Jayawardene. Ajmal has often created trouble for him and this time around he fails to read the of-spinner and is out. He choses not to review it. Standing ovation from the spectators. Ninth instance of Ajmal dismissing Jayawardene. Replays showed the ballwould have just kissed the top of the stump, clipping the bails.

Tea: Mahela Jayawardene has been dropped by keeper Sarfaraz just before tea off Riaz’s bowling. The ball was angled across and he nicked it. Tough one but you are expected to catch those on these wickets.

Jayawardene given a Guard of honour by the Pakistan team

Wahab Riaz gets a full one and the stumps are in a disarray. Big wicket for Pakistan. But enter Mahela Jayawardene. Crackers burst around the ground and the spectators are giving a loud cheer to their legend.

Lucky survival for Sabgakkara. Wahab Riaz has been off-colour in this innings but this time around he shoots a well-directed bouncer and Sangakkara tries to fend it off. The ball takes the edge off the face of the bat and Misbah at short fine-leg desperately tries to reach for it but it falls just short.

He fought hard and got to a much-needed fifty. Upul Tharanga was under tremendous pressure coming in to this match and he looked extremely vulnerable at the start. But eventually he manages to stay patient on a good batting wicket and get to his half-century.

Sangakkara is feeling at ease on this pitch. He has already hit some breezy cover drives off the middle of his bat. Meanwhile,  Tharanga is inching closer to a hard fought half-century.

Junaid Khan strikes and gets the breakthrough for Pakistan. Kaushal Silva tries to drive at a delivery pitched full and nicks to keeper Sarfaraz Ahmed. Played away from the body. Junaid was patient and trying to pitch it up close to the batsman.

Ajmal starts of after lunch from one end and Junaid from the other. The Lankan openers are happy to nudge around and take the singles. Junaid does get Tharanga in a spot of bother with change of pace but no harm done.

LUNCH: A dull session at Colombo. The Lankans have cruised to 69, the scoring rate might show a bit of caution but that was a result of spinners bowling continuously tying them down.

Skipper Misbah looks clueless how to attack on this pitch. He is continuing with his spinners who have done well in at least containing the openers. 15-20 minutes still to go for lunch. Silva and Tharanga look settled now. The ball is a bit old and reverse swing could be a little ray of hope for the pacers.

All eyes on Saeed Ajmal and he has looked good so far. The spinners are bowling from both ends and have managed to tie them down.

Drinks Break: Abdur Rehman starts off with two maiden overs. But it’s not the dot balls but breakthroughs which are crucial. Silva has been solid with his technique. Cnange of ends for Riaz and he prefers to come round the wicket to a right-hander, starts with off wayward deliveries and the third ball is cut away for four. The pacers haven’t pitched the ball up often.

Evident signs of the pitch being a dead track. With pacers struggling to find any purchase, Misbah brought in spinner Abdur Rehman as early as in the 10th over of the innings. Will be a test of stamina for Pakistan’s bowling resources.

Wahab Riaz and Junaid have started off well. Tharanga has looked tentative and vulnerable outside the off-stump. Perhaps the first hour is going to be a tricky one for the batsmen. However there isn’t any swing or movement of the pitch. The outfield looks a touch slow. Tharanga once again pushes through covers and has to settle with a couple.

Lovely start from Tharanga. Pitched up from Junaid and he drives it through the covers for a couple. Junaid comes back well to go past his outside edge but Tharanga wins the battle of the over and hits through covers on the last ball for four.

Sri Lanka are determined to send former captain Mahela Jayawardene into retirement with a victory in the second and final Test starting Thursday against a fragile Pakistan and a 2-0 series sweep. Captain Angelo Mathews said emotions were running high in the home team’s dressing room before the match at Jayawardene’s home ground at the Sinhalese Sports Club (SSC) in Colombo, reports AFP.

“It is an emotional moment for everyone,” Mathews said. “We want to win it for him. He has been the pillar of strength for us for so many years. We will miss him a lot. The best thing we can do is try and win the game and give him the best farewell that we could possibly give him.”

Jayawardene, 37, who has already retired from Twenty20 internationals, will quit the longer format after the Test, even though he will continue playing in one-day matches till next year’s World Cup Down Under. The elegant right-hander is one of only five batsmen to score more than 11,000 runs in both Test and one-day cricket — the others being Sachin Tendulkar, Ricky Ponting, Jacques Kallis and team-mate Kumar Sangakkara. Sri Lanka won the first Test in Galle on Sunday by seven wickets after a nail-biting chase when they beat fading light to surpass the target of 99 in the final session just before heavy rain drenched the ground. Hi I am Abhijit Banare  and I will be bringing you live updates of the 2nd Test in Colombo. 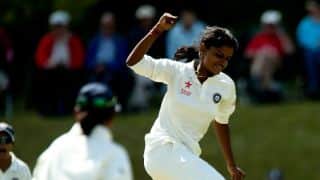 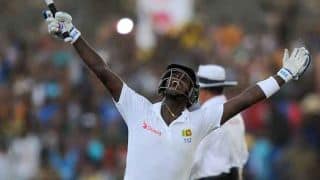