Pakistan lose a couple of important wickets towards the end of a nearly flawless second session.

Pakistan reached 126 for the loss of three wickets after 36 overs at the end of the second session on the second day of the final Test against Sri Lanka at Sinhalese Sports Club at Colombo. Younis Khan and Misbah-ul-Haq were batting at Tea at 10 and 0 respectively while Rangana Herath emerged the pick of the Sri Lankan bowlers with figures of two for 43.

Having resumed from their Lunch score of 47 for one, the duo of Ahmed Shehzad and Azhar Ali took the Lankan bowlers to task with some fine and patient display of batting. The two brought up the fifty run partnership as Shehzad notched up his second Test half-century. The Lahore lad smashed seven boundaries during his innings in which he handled the spinning duo of Herath and Dilruwan Perera with ease.

The Lankans were starting to lose hope at one stage when the dangerous Herath struck again, this time deceiving Ali into dancing down the track and attempting to slog him over mid-on. What transpired eventually was a simple catch by skipper Angelo Mathews at short mid-wicket. Azhar was soon got company at the pavilion as Perera got his first wicket of the match by removing the well-settled Shehzad, who attempted to pat a delivery pitched outside leg-stump. Keeper Niroshan Dickwella anticipated the catch and took a terrific one in the end.

The dismissals will definitely slam the brakes on the Pakistani momentum as the experienced duo of Younis and Misbah will now share responsibility of bringing the momentum and tide back to their favour. The hosts, in the meantime, are on a high after getting the main wicket of Shehzad. Herath, who has emerged the pick of the bowlers so far, will now target the veterans at the crease to help the Lankans gain complete control of the match. 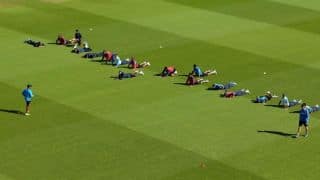 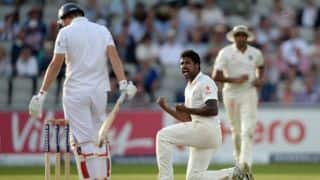