Catch Live Updates of the 2nd Day of the First Test between Sri Lanka and South Africa here.

SL 30/0 | Overs 12
U Tharanga 20(40), K Silva 8(20)
The openers have made a cautious start and are working along with minimal risks. Tharanga has played a couple of nice shots to the fence. Its stumps on Day two but Sri Lanka need a big effort on Day three.
SL 14/0 | Overs 7
U Tharanga 9(25), K Silva 3(18)
Dale Steyn and co are firing it in around the good length area and making the batsmen play. South African bowlers are looking good to make inroads though.
SA 455/9 | Overs 166.2
JP Duminy 100(206),
JP Duminy reaches his century. Its his second in 2014. This has been an absolute class act and difficult feats seem to come naturally for this man. Coming in at No 8, scoring a century was always going to be daunting. This is fourth century and the Protea tail also deserve a lot of credit. Morne Morkel is bowled by Dilruwan Perera and South Africa declare!
OUT! M Morkel 22(74)
SA 442/8 | Overs 162
JP Duminy 91(193), M Morkel 18(61)
JP Duminy is looking increasingly impatient to complete his century and trying to play attacking shots. He finally gets a boundary of Herath.
SA 434/8 | Overs 158
JP Duminy 83(178), M Morkel 18(52)
JP Duminy is nearing his hundred and he’ll need Morkel to give him company till he gets there. He almost gave his wicket away going after a Herath delivery. Perera at mid-off was the culprit for the dropped catch.
SA 428/8 | Overs 154
JP Duminy 78(168), M Morkel 17(38)
Duminy has kept the scoreboard ticking, and Morne Morkel has given him good support. Morne Morkel was almost trapped LBW off a Suranga Lakmal delivery, but the umpire gave it Not Out! Sri Lanka reviewed but the replay suggested that the on-field umpire was right.
SA 414/8 | Overs 149
JP Duminy 72(154), M Morkel 9(22)
Sri Lanka have been desperate for wickets and JP Duminy has made them scratch their head for answers. Morkel has settled in well. Will South Africa go for a declaration? We will have to find out. Its Tea time for now.
SA 389/8 | Overs 139
JP Duminy 56(115), M Morkel 0(2)
Believe it or not, Vernon Philander is dismissed for the first time in six innings. Just when he was making a mockery of some of Sir Don’s records, Angelo Mathews traps him front. Morne Morkel comes to the centre. He needs to do replicate Philander’s knock and help South Africa get another 30-40 runs.
OUT!V Philander lbw b Mathews 27(96)

SA 359/7 | Overs 128
JP Duminy 51(102), V Philander 19(73)
JP Duminy has played a busy yet gritty knock and has got to his fifty. After an amazing start to his career against Australia, he fell on the wayside somewhat and he is back with a bang in 2014. His bowling has improved greatly as well.
SA 359/7 | Overs 128
JP Duminy 41(89), V Philander 12(57)
Rangana Hearth got some turn and bounce and almost cleaned up Vernon Philander. Duminy has put in all the hard work and is heading towards a half-century. The last couple of hours have been about negating the spin threat and play ol’ school Test cricket and Sri Lanka are hating this.

With Quinton de Kock getting out on 51, that’s the 1st time in his intl. career that he hasn’t converted a 50 into a 100! #superdekock

SA 331/7 | Overs 121
JP Duminy 22(66), V Philander 3(38)
Duminy and Philander have dropped anchor and blunting the Sri Lankan attack. Despite there being turn, batting is still good on the wicket. The bowlers look frustrated and anything over 400 will put South Africa in command. Its Lunch time at Galle.
SA 314/7 | Overs 109
Q De Kock 44(80), JP Duminy 9(23)
Thats fifty for De Kock. The cracking hundred he scored in the final ODI at Hambantota is clearly given him the much needed impetus. He had a rough time against Mitchell Johnson’s snorters at home. And then he nicks it to Jayawardene at first slip and he departs.
OUT! Q de Kock c Jayawardene b Perera 51 (90)
SA 307/6 | Overs 106
Q De Kock 44(80), JP Duminy 9(23)
Eranga hurting the webbing of his fingers has certainly hurt the Sri Lankans. The wicket has offered a lot of turn but these tow southpaws are gritty customers. A big partnership from duo will certainly put South Africa on top.

SA 290/6 | Overs 99
Q De Kock 36(64), JP Duminy 0(4)
Thats bowled! After Shaminda Eranga hurt his fingers and was declared unit to bowl in the Test, Lakmal has to share a lot of the workload now. It is fast and straight and breaches the hapless tail-ender’s defence and its the first wicket of the morning.
OUT!D Steyn b Lakmal 3(20)
SA 284/5 | Overs 96
Q De Kock 31(54), D Steyn 2(9)
Quinton de Kock is not holding back and has spanked two back-to-back boundaries at the start of the day’s play. Suranga Lakmal was guilty of misfielding a simple one which came straight to him. The ball went between his legs and through to the boundary.

South Africa took first day honours in the first half of the day’s play against Sri Lankaat Galle on Day of the first Test through Dean Elgar‘s sparkling ton and and a gritty yet attacking 80 from Faf fu Plessis.  The hosts clawed their way back through an excellent session post tea that saw them run through four South African batsmen.
The first half of the day’s play was a phase where the South African batsmen negated the pacers of Sri Lanka. Suranga Lakmal and Shaminda Eranga were insipid and pitching it in the areas where Elgar and Alviro Peterson wanted. Runs came thick and fast for the visitors in this phase eased the nerves, given the Proteas’ past record in these parts.

After seeing off the early part of the first session successfully, where the batsmen piled up 107 runs on the board, losing only Peterson, the batsmen flexed their muscles. Elgar and Faf fu Plessis then took charge and went after the spinners at will. Even the usually unplayable Rangana Herath was torn apart by the aggressive strokeplay of Elgar and the charismatic Du Plessis. Hi, I am R Vishal and I will be bringing you live updates of the second day’s play here. 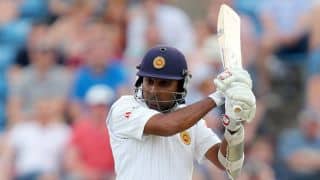 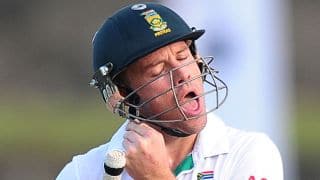