SA 268/5 | Ovs 91
Q de Kock 15(27) D Steyn 0(0)
Late Strikes have made a different reading to the scorecard and the hosts are back on track after being hit out of the park for the better part of the day’s play. South Africa have just thrown away their advantage. Especially the world class batsmen — Amla, Du Plessis and AB de Villiers. Thats it from me today. We will see you tommorow
SA 266/5 | Ovs 90
Q de Kock 15(27) D Steyn 0(0)
Oh boy! this could well turn out to be the last day of the day’s play. AB is done by the late swing and the ball hits the batting maverick’s bat, then hits his pad and hits the stumps.
OUT! AB De Villiers b Lakmal 21 (48)
SA 249/4 | Ovs 83
De Villiers 16 (31), Q de Kock 3(2)
Tame dismissal. Du Plessis comes on the front foot and then retracts. The ball hits is glove and Kaushal Silva at forward short leg takes a smart catch. What a waste when Faf was looking good for another century.
F Du Plessis c Silva b Perera 80(196),
SA 220/3 | Ovs 74
F Du Plessis 71(178),
That was a bad shot by the impregnable Hash. The new South African captain tamely chips the ball to mid-on off Rangana Herath and Sri Lankans are cock-a-hoop after nabbing the big fish.
OUT! H Amla c Perera b Herath 11(36)

So Elgar’s gesture after reaching his 100 was because the video analyst @prasannalara has to shave off his moustache! #slvsa

SA 195/2 | Ovs 63
F Du Plessis 57(145)
Dean Elgar departs after a wonderful knock. Runs weren’t coming as thick and fast as it did in the early exchanges of the final session. The southpaw goes for an expansive drive and finds the edge and its a straightforward catch for Dinesh Chandimal.
OUT! D Elgar c Chandimal b Lakmal 103(187)
SA 190/1 | Ovs 60
D Elgar 102(175) F Du Plessis 57(139)
Dean Elgar’s scintillating ton will take all the plaudits for this session. It has been a brilliant ton and his footwork against the spinners has been exemplary. Elgar released a war cry after reaching his century and South Africa are on top at Tea.

What a view, What a stadium..serene and quaint where time stops still!

Lovely half-century from Graeme Smith in Galle this morning. pic.twitter.com/DMyUsXKBGm

SA 174/1 | Ovs 51
D Elgar 90(149) F Du Plessis 49(106)
Sri Lankan shoulders are drooping and the spinners that they heavily bank on have been taken to the cleaners today. You have got to tip your hat to Dean Elgar will and audacity today. The pitch though has been placid for the most part and the batsmen have captalised on it with utmost glee. Millestones await the tow batsmen at the crease. Having said that the Lankan spinners go through a rare good phase by getting three maiden overs in a row.
SA 164/1 | Ovs 46
D Elgar 86(138) F Du Plessis 43(93)
South Africans are on the front foot against the spinners. Even the otherwise impeccable Herath is going for plenty and Sri Lankans look bereft of answers. Du Plessis is in a punishing mood and is not afraid to go over the top to look for runs. The highlight of the session so far is a big six over long on by the man who celebrated his 30th birthday two days ago, Du Plessis.
SA 125/1 | Ovs 36
D Elgar 71(109) F Du Plessis 19(61)
South Africa have been cautious after lunch. Elgar continued his aggressive streak though by coming down the pitch and whacking Rangana Herath over long
SA 111/1 | Ovs 29
D Elgar 62(91) F Du Plessis 14(37)
South Africa hold fort at Lunch and there Elgar is responsible for blunting the home attack. Sri Lanka look bereft of ideas and Du Plessis is also looking comfortable at the crease.
SA 99/1 | Ovs 25
D Elgar 53(75) F Du Plessis 9(28)
Dean Elgar reaches a stroke-filled half-century. On his way to his fifty he came down the track to Perera and heavd a big six over deep mid-wicket. Elgar cuts the ball to the boundary and the southpaw races to his second Test match fifty.

SA 70/1 | Ovs 17
D Elgar 35(55) F Du Plessis 0(1)
Spinners are in play after the South African openers’ aggressive start. Elgar and Petersen clobbering the bowling around draws to a close. Its off-spinner Dilruwan Perera who gets the much needed breakthrough for the hosts. The ball spins slightly into the batsmen and it pitches in line and umpire Richard Kettleborough raises the finger. The decision goes upstairs and replays show that the ball is indeed kissing the leg-stump and Petersen departs after being well set.
A Petersen lbw b D Perera 34(46)
SA 52/0 | Ovs 12
D Elgar 27(36) A Petersen 25(36)
Eranga and Lakmal are over-pitc hing the ball and Elgar and Petersen have latched on to it with utmost glee and and a flurry of boundaries have come in the early part of the day’s play. The fifty is already on the board and the batsmen look hungry for more. Angelo Mathews brought the ever reliable Rangana Hearth on early to stem the flow of runs. The ploy worked but the pacers are taking quite a beating.
SA 5/0 | Ovs 3
D Elgar 1(11) A Petersen 4(7)
So Things get under way in the picturesque Galle cricket stadium in the southern tip of the country. AB de Villiers is still recovering from his injury and though he is playing, he won’t be keeping today. Dean Elgar is given further opportunities up the order as the Proteas search for a long term replacement for Graeme Smith. Comeback man Suranga Lakmal and Shaminda Eranga start proceedings for the home side and there were a couple of close calls against the tentative South African openers.

TOSS: South Africa have won the toss and elected to bat in the first Test of the series.

Hello and warm welcome to the first Day of the first Test of the series between Sri Lanka and South Africa at Galle. This is R Vishal and I will be bringing you live updates for the day’s play. Sri Lanka’s form in the longer format of the game has been good in recent times. They drew a Test series in Pakistan earlier this year, and then went onto beat England in their own backyard last month. In Angelo Mathews, they have a fine captain. Veterans like Mahela Jayawardene and Kumar Sangakkara have been leading from the front with the bat in hand.

For South Africa, Hashim Amla has been appointed as the new captain in place of Graeme Smith, who has retired from the game. They will depend on their pace trio of Dale Steyn, Morne Morkel and Vernon Philander to do the trick. South Africa’s batting mainly revolves around the likes of Amla himself and AB de Villiers.

Sri Lanka’s bowling line-up depends on Rangana Herath, the slow left-arm orthodox. Shaminda Eranga is their best quick. They also have Suranga Lakmal, who is making a comeback into the squad. The track at Galle should offer some seam movement early in the piece, before it starts to offer sharp turn during the later part of the Test match. 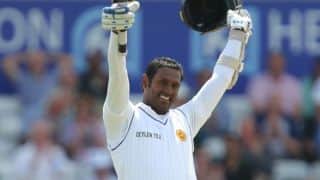