Jean-Paul Duminy hit a superb unbeaten century to put South Africa in a position of strength.

Sri Lanka 283/9 | Overs 100
R Herath 12(44)
Suranga Lakmal walks back after being dismissed by Morne Morkel for six. The right-arm pacer gets the batsman caught by Quinton de Kock. It’s been a mixed day, with South Africa ensuring they take a huge first-innings lead and Dale Steyn taking five wickets. On the other hand, Angelo Mathews scoring a gritty half-century.
OUT! Lakmal c de Kock b Morkel 6(20)
Sri Lanka 272/8 | Overs 95
R Herath 7(34),
Big wicket! After being smashed for runs throughout the day Imran Tahir claims the all-important wicket of Angelo Mathews. He is cleaned up by South African spinner.
OUT! A Mathews b Imran Tahir 89(182)
Sri Lanka 272/7 | Overs 94
R Herath 7(34), A Mathews 89(176)
Angelo Mathews is nearing his century as Sri Lanka have bounced back well after being reduced to 201 for seven. Sri Lanka are still trailing by 183 runs and these two would be crucial for them.
Sri Lanka 242/7 | Overs 86
R Herath 3(21), A Mathews 67(141)
Angelo Mathews is waging a lone battle for Sri Lanka at the moment. The captain has taken the charge of rebuilding Sri Lankan innings and is doing it at ease. He plundered 20 runs off Morne Morkel in one over. From the other end, Rangana Herath is batting well at the other end.
Sri Lanka 201/7 | Overs 76
D Perera 0(2), A Mathews 30(93)
The wheels are coming off very soon for Sri Lanka. Dale Steyn completes his five-wicket haul, getting Dilruwan Perera caught by wicketkeeper Quinton de Kock for a duck. South Africa are jubilant.
OUT! D Perera c de Kock b Steyn 0(5)
Sri Lanka 200/6 | Overs 74
D Perera 0(2), A Mathews 30(93)
Dale Steyn is proving why is he the best bowler in international cricket. It is a flat deck but he has just claimed his fourth wicket in the innings. Dinesh Chandimal goes for his shot but fails to keep it on the ground. Alviro Petersen takes a simple catch at mid-wicket. South Africa all over Sri Lanka at the moment with a lead of 255 runs.
OUT! Chandimal c Petersen b Steyn 6(11)
Sri Lanka 195/5 | Overs 72
D Chandimal 5(4), A Mathews 26(90)
And another one bites the dust. Lahiru Thirimanne would be gutted to have wasted a strong start. Steyn sends down a wide delivery, and the batsman chases it. Gets an edge and the ‘keeper does the needful. South Africa all over Sri Lanka at the moment.
OUT! L Thirimanne c de Kock b Steyn 38(98)
Sri Lanka 182/4 | Overs 66
L Thirimanne 32(85), A Mathews 24(71)
Sri Lanka would be pleased with their efforts in the second session. They did not try to attack much, instead Thirimanne and Mathews went about their job cautiously. South Africa are still 273 runs ahead. Time for tea.
Sri Lanka 160/4 | Overs 57
L Thirimanne 19(58), A Mathews 15(44)
Thirimanne and Mathews are slowly building the Sri Lankan innings. The South Africans are attacking from both ends with spin and pace, but so far these two batsmen have managed well.
Sri Lanka 147/4 | Overs 51
L Thirimanne 19(45), A Mathews 2(21)
Lahiru Thirimanne and Angelo Mathews have steadied the ship for Sri Lanka.
Sri Lanka 104/3 | Overs 36
U Tharanga 65(131)
Dale Steyn strikes again! The right-arm pacer traps Mahela Jayawardene in front of the wickets as South Africa have dealt a big blog here in the game.
OUT! M Jayawardene lbw b Steyn 3(9)
Sri Lanka 101/2 | Overs 33
U Tharanga 65(122),M Jayawardene 0(0)
Big wicket! Kumar Sangakkara is cleaned up by Morne Morkel as Sri Lanka have lost their second wicket. The left-handed batsman tries to pull but gets an inside edge, and the ball goes onto hit the wickets.
OUT! K Sangakkara b Morkel 24(34)

Sri Lanka 98/1 | Overs 31.4
U Tharanga 62(116), K Sangakkara 24(32)
Sri Lankan batsmen are progressing without much trouble from the South African bowlers. Rain has halted the play meanwhile at Galle.
Sri Lanka 72/1 | Overs 25
U Tharanga 45(95), K Sangakkara 16(13)
Kumar Sangakkara and Upul Tharanga have done well to revive Sri Lanka’s innings after the early blow. The South African bowlers are trying hard to get another breakthrough, but everything done so far has not yielded any result.
Sri Lanka 39/1 | Overs 17
U Tharanga 20(40), K Sangakkara 0(3)
There’s the first breakthrough! Talk about flat decks and non-responsive wickets, but none of it fazes Dale Steyn. He bowls a bouncer which Kausal Silva tries to pull, gets a top edge and Vernon Philander takes a fine catch deep in the leg side. Sri Lanka lose their opener early in the day.
OUT! K Silva c Philander b Steyn 8(43)

Hello and welcome to CricketCountry’s coverage of the third day’s play of the first Test match between Sri Lanka and South Africa at Galle on Friday. Sri Lanka will be resuming their innings at 30 for loss, trailing by a further 425 runs in the first innings against South Africa. This is Devarchit Varma, and I will be bringing you the live updates of the match.

According to AFP, Jean-Paul Duminy hit a superb unbeaten century to put South Africa in a position of strength on the second day of the first Test against Sri Lanka on Thursday. The left-hander came in to bat with South Africa placed at a shaky 331-7 but he batted sensibly under pressure to help his side declare their first innings at 455-9.

In reply, Sri Lanka were 30-0 when stumps were drawn for the day with Kaushal Silva batting on eight and Upul Tharanga on 20. Tharanga, playing his first Test in six years, showed little signs of nervousness, hitting four boundaries in his 40-ball innings so far. 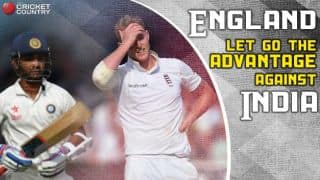 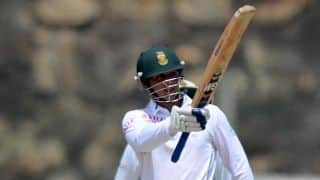