Catch the live updates for the first Test between Sri Lanka and South Africa here.

Dale Steyn in the man of the match for his nine wickets in the game. Quite fitting, he bowled splendidly throughout. What a champ! Check out our match report here.

Hello and a warm welcome to what promises to be an exciting final day’s play in the first Test between Sri Lanka and South Africa at Galle. I am Shiamak Unwalla, and I will be bringing you live updates for the day’s play. In what has been a Test match dominated by South Africa, the Sri Lankan batsmen showed their mettle on the fourth day by doing well on a turning deck. Kumar Sangakkara, the veteran and Sri Lanka’s best batsman, countered the sharp turn expertly  to end up with a fifty at the end of the day. Now, they require 260 more runs to script a famous win.

Earlier, South Africa’s new skipper, Hashim Amla declared the innings at 206 for the loss of six wickets to set Sri Lanka a target of 370 runs. However, Imran Tahir and JP Duminy haven’t been able to take advantage of spin friendly conditions on offer. On the fith day, Tahir has to come into play for South Africa to script only their third Test win in Sri Lanka. It has been South Africa who have dominated this Test match, as they bowled out Sri Lanka for just 292 runs to take a lead of 163 runs. Dale Steyn even took a five-wicket haul. Morne Morkel and other bowlers supported him well by bowling good spells.

Hopefully, it can turn into an exciting final day’s play with runs being scored and South Africa taking wickets. The track surely is offering enough assistance for the bowlers to make it an enthralling Test match. 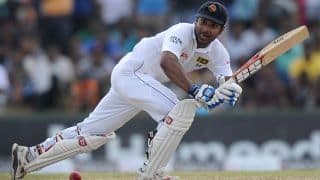