In August, Angelo Mathews injury had forced him to stay away from One-Day International (ODI) and two Twenty20 International (T20I) series against Australia.

Sri Lanka s regular skipper Angelo Mathews recently pulled out of the Zimbabwe series due to leg injury. He was initially mentioned in the squad, however, after an MRI scan and consulting the medical panel, the decision was taken to pull out of the tour and help him recover before the tour to South Africa in mid-December. In August, this injury had forced him to stay away from One-Day International (ODI) and two Twenty20 International (T20I) series against Australia. His deputy Dinesh Chandimal was appointed as stand-in captain for the same. Considering his injury is serious, Mathews is expected to be out of action not only for the tri-series but also the West Indies tour. FULL CRICKET SCORECARD: Zimbabwe vs Sri Lanka, 1st Test at Harare

For the Test series, Rangana Herath will make his late Test debut for two Test series while Upul Tharanga has been included in the squad in Mathew s place. Speaking to ESPNCricinfo.com, Mathews said, I had about one-and-a-half months to recover and I was preparing myself to be ready for the Zimbabwe tour. Unfortunately there has been a setback. We did an MRI scan which revealed that I had multiple injuries on the same leg. I had to pull out after the expert medical panel advised me and [told] SLC not to send me to Zimbabwe because it might jeopardise my chances of playing in South Africa.

He further added, We are planning to take a closer look at why this is happening. I hope my injury doesn’t take that long to heal. The doctors have advised rest, and the recovery can be earlier than that or more; we will have to play it by ear. I don’t think it will surpass the South African tour.

Sri Lanka are not the usual strong team that played against Australia recently as the team included Chandimal, Dhammika Prasad, Nuwan Pradeep and Dushantha Chameera, have all been ruled out due to injury. So the pace attack will very much be spearheaded by Suranga Lakmal. Chandimal has been kept away from the series due to thumb injury. He also underwent surgery for the same in September. Herath will be the only second bowler to lead Sri Lanka in Tests. However, the team is optimistic to lead the team from the front and provide good performance in Zimbabwe after the series whitewash against Australia. ALSO READ: Zimbabwe vs Sri Lanka: Angelo Mathews ruled out due to injury, Rangana Herath to lead SL

Before departing to Zimbabwe, Herath held a press conference and said, If you take our performance in the recent Test series against Australia the confidence we gained from the 3-0 win will be very beneficial to us. The team’s confidence levels are very high after that victory. The team that I have I am confident can perform well in Zimbabwe.” The Sri Lanka Cricket Board president Thilanga Sumathipala has blamed the management as well as immense workload for the player s injuries. The president also mentioned he will look into the issue soon and get it sorted.

Speaking about the same, Sumathipala said, We have not managed our players properly for the last three years. We are experiencing good cricketers who have come in from Under-19, U-23 and club level, but once they reach the top level they can’t sustain their physical condition because they have been badly managed. Mathews is a world-class all-rounder and there is so much demand and so much of pressure on his body that it’s not easy for a person like him to be without an injury unless he has a proper scientific approach.

He further said, Mathews had the highest number of match days in the past 18 months. At this level a player simply cannot go on. He has to pull out and take a genuine break for the body to recover. We don’t have enough recovery time. ALSO READ: Angelo Mathews: Sri Lanka s lone warrior

Sumathipala said that the possibility of Lakmal going on the South Africa tour without a proper break highlighted how important workload management was for players, particularly bowlers. You have to make an assessment of the player and then based on the assessment you make a permanent study of the player which you call player management. If there is a fast bowler who has bowled 100 overs there should be a study saying that after 18-20 overs you have to stand him down and pull him out of the game, let him recover physically which we don’t do. We never had proper player management. Someone like Lakmal is being excessively used. Our most important tour is definitely to South Africa. Can we go on this tour without Lakmal being given a break? added Sumathipala.

The first Test will be played at Harare on October 29 while the second Test will be held on November 6. The last time these teams met were on May 2004. 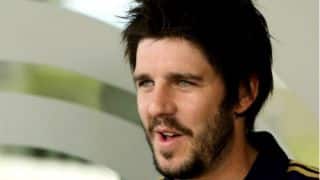 When Mitchell Johnson and Kevin Pietersen almost had a physical altercation