Sri Lanka's Lahiru Thirimanne fired a warning to the English batsmen before the Test series.

Sri Lanka‘s Lahiru Thirimanne insisted that the tourists would have no qualms about running out an England batsman backing up too far during their upcoming Test series, despite the furore over Jos Buttler‘s dismissal at Edegbaston.

Sachithra Senanayake ran out England’s Buttler as the non-striker, who only days earlier had made a blistering hundred at Lord’s, for 21 during Sri Lanka’s 3-2 series-clinching victory in the fifth and final one-day international at Edgbaston on Tuesday.

Although a perfectly legal dismissal, the exit of Buttler sparked a global debate about whether it was within the ‘spirit of cricket’ — even though the bowler had previously warned the batsman.

“We actually warned him twice, he was taking starts after we warned him so I think that’s the rule of the game,” Sri Lanka vice-captain Thirimanne told reporters on Thursday.

“After the first time he has to learn, if he’s doing two or three times you can’t help it,” Thirimanne added.

Asked if they’d be prepared to dismiss a batsman in such a manner during the two-Test series against England, which starts at Lord’s a week on Thursday, Thirimanne replied, “Yes, if he’s taking unfair starts, we’ll warn him, warn twice and after that…”

Asked if the incident involving Buttler, not included in England’s 12-man squad for Lord’s announced Thursday, could lead to ill-feeling in the Test series, Thirimanne replied: “England, in the one-day tournament came at us really hard, I don’t think they’ll come at us much harder (in the Tests).

“We’ll expect some good cricket and we’re looking forward to it.”

Buttler’s exit was only the eighth reported instance of a ‘Mankad’, the term coined after India’s Vinoo Mankad ran out Australia non-striker Bill Brown during the 1947/48 Sydney Test, at international level,

Thirimanne was speaking after making 120 not out on the first day of Sri Lanka’s four-day warm-up match against Northamptonshire.

Together with opener Kaushal Silva (152 not out) he’d so far shared an unbroken stand of 238 at Northampton.

But left-hander Thirimanne, captaining the side in the absence of the rested Angelo Mathews, had a huge slice of good fortune when he was dropped first ball by teenage wicketkeeper Ben Duckett off a regulation chance.

“It was nice to have some time in the middle. It was a nice ball, I just nicked it and I was lucky to bat through the rest of the day’s play,” he said. 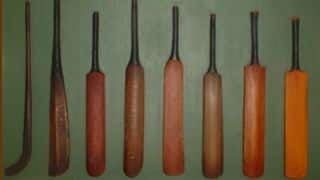