Amidst the buzz around Hashim Amla s 100th Test, the morning session belonged to the Sri Lankan fast bowlers, not for the first time in the series.

Amidst the buzz around Hashim Amla s 100th Test, the morning session belonged to the Sri Lankan fast bowlers, not for the first time in the series. Their pace attack has been Sri Lanka s lone positive in what has been a disastrous tour otherwise. Sri Lanka have forced South Africa to rethink their decision to bat first on a lively track on Day One of third and final Test. Sri Lanka were certainly on top when the teams took lunch, with South Africa on 79 for 2. The scoreboard does not reflect how well the visiting bowlers have bowled. After Stephen Cook and Dean Elgar perished in consecutive overs, Hashim Amla and JP Duminy saw through the session and are batting on 6 and 23 respectively.

Faf du Plessis won the toss and elected to bat despite a cloud cover and a Sri Lankan armoury that boasted of four pacers. Duanne Oliver, the 24-year old Free States pacer, earned his maiden Test cap, while Wayne Parnell replaced Keshav Maharaj. This will be Parnell s first Test in almost three years. A good domestic show, along with Kyle Abbott s sudden retirement, paved the way for Parnell.

Coming to the match, Suranga Lakmal and Nuwan Pradeep clocked good pace and extracted extra bounce from the surface and bowled tight lines, creating problems for the in-form South African openers, Elgar and to a larger extent Stephen Cook.

Sri Lanka were not happy with the ball after the 11th over and a new ball was brought in. Umpire Rod Tucker had to knock the ball on the ground to take the shine off it to take it to a 10-over-old condition. After having seen the red cherry, South African openers were displeased with the decision.

After the initial moments of discomfort, Elgar cashed in on his rich form. Between the misses, there were elegant cuts and drives.

Angelo Mathews employed himself after drinks and created serious problems for the batsmen. In his third over he got the ball to move in and Cook missed. The ball struck him below the knee-roll and he was adjudged out . Cook went for a review, but the only concerns seemed to be with overstepping. Third umpire Aleem Dar ruled it in Mathews favour. The ball would have hit the stumps. The on-field decision stayed.

Amla walked out to bat in his 100th Test. However, before the crowd could celebrate his arrival properly, another wicket fell in the next over: Elgar edged an angled-away delivery from Thilan Kumara to Dimuth Karunaratne at first slip.

Had Sri Lanka fielded better, they could have inflicted further damage. In the over before lunch, Amla was dropped at gully by Dhananjaya de Silva. Amla may just go on to seize the moment.

Duminy s counterattack helped South Africa improve the run-rate and forced the Lankan bowlers to go slightly defensive. With Sri Lankan pacers having their tails up, Amla struggling and plenty happening off the surface, an interesting second session awaits. 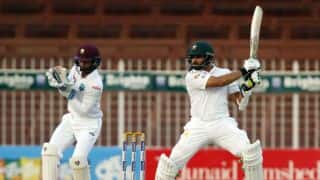