On a sluggish pitch, the Sri Lankan spinners did well to restrict India to 264 for nine in the fourth match of the Asia Cup 2014 at Fatullah on Friday. Shikhar Dhawan played a mature innings of 94. Ajantha Mendis and Sachithra Senanayake shared seven wickets amongst themselves.

Both teams were smart enough to understand the conditions right after their respective opening matches. Realising the value of slower bowlers on the flat pitch, both teams made minor tweaking down the order. Stuart Binny’s medium pace and batting abilities helped him replace Varun Aaron while Suranga Lakmal, who was thrashed against Pakistan made way for Mendis. Both the captains expressed the decision looking at the slow nature of the wicket.

While there was huge discussion on the India’s chasing abilities, Angelo Mathews, having won the toss ensured that the Virat Kohli-led Indian team will bat first. The conditions were right according to what the two captains expected as the runs were hard to come by. Playing with soft hands was the trick which both the openers missed at the start.

But Dhawan picked up the cue early while Rohit continued to struggle as Senanayake was introduced well inside the first powerplay. Rohit’s record against Sri Lanka hasn’t been impressive and since his double ton against Australia at home, the runs have dried up. He squandered another opportunity as he was trapped plumb in front by Senanayake.

On such a slow wicket hitting through the line wasn’t going to fetch much runs, the batsmen could easily get frustrated and go for a big shot like it happened for most part of the Pakistan innings against Afghanistan. But Kohli and Dhawan played very well against the slower bowlers and once they got their eye in, the big shots kept flowing at regular intervals.

While Kohli is in the form of his life, Dhawan has done well in altering his aggression from the Test series against New Zealand. Even here, he was content in waiting for the loose balls. And it paid off well as he cruised to his sixth ODI fifty. Kohli didn’t have any such hard work to do as he continued with his drives and even smacked a well-timed six off Chaturanga de Silva’s bowling. Eventually some smart bowling by Ajantha Mendis did the trick as he beat Kohli on his forward defense and castled him for 48.

The Indians were unperturbed by Malinga’s fuller deliveries and when the boundaries were tough to come by, they were busy with the quick singles and twos.

It was once again a matured Ajinkya Rahane doing the scoring with his timing, while Dhawan started taking his chances inching closer to his century. Just as Rahane settled in, the duo opted for the batting powerplay from the 33rd over. It looked like a good decision until Rahane’s favourite shot — the inside out drive over covers, saw him get a leading edge and caught at short third-man for 22. Senanyake broke that partnership.

As the Indians looked to build on the momentum, Mendis proved to be the thorn once again. Dhawan was bowled for 94 trying to go for a cross-batted shot to a short straight delivery. It was a sudden break to the Indian innings and the 300-plus total seemed distant. Dinesh Karthik (4) threw away his wicket mistiming Mendis in the same over.

Though the slower bowlers were on target, the batsmen gave away too much with their poor shots. Ambati Rayudu played a small cameo of 22 but lofted Chaturanga de Silva’s delivery straight to long-off and Stuart Binny went for a four-ball duck.

Ravichandran Ashwin went for a 16-ball 18 and Mendis came back to remove Bhuvneshwar Kumar for a duck. Ravindra Jadeja failed to get enough strike to knock some quick runs. There was a little surprise in store at the end when Mohammed Shami smacked two huge sixes against Mendis over mid-wicket which took India past 250 and spoiled his impressive bowling figures. It was also the first time since 1996, an Indian No 11 batsman has hit two sixes.

The cloudy conditions might ensure that there won’t be enough dew to trouble the bowlers. Considering the slow nature of the wicket, India still stand a good chance of defending the score. 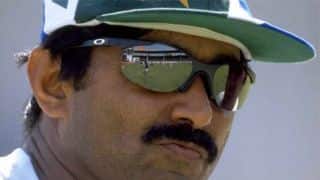