England captain Alastair Cook will face a ban if his team is found guilty of a slow over-rate following their third One Day International (ODI) in Sri Lanka, which they won by five wickets.

England beat Sri Lanka by five wickets in Hambantota, but the hosts took another 20 minutes to finish their quota of overs in a match that was reduced to 35-overs a side after a rain delay. Cook faces a suspension if found guilty of a slow over-rate .

Cook was fined for a similar offence after an ODI game against India in August was warned that he would be banned for any repeat within 12 months admitted that his side were a bit slow.

International Cricket Council (ICC) match referee David Boon would decide whether to apply a ban, although he could spare the England captain depending on how much time was lost for reasons outside his control.

Cook said that he was aware of the possibility of a suspension coming into the seven-match series, but suggested that the size of the ground and the slow rate at which Sri Lanka’s batsmen came to the crease were also a factor in how long the innings took to complete.

Sri Lanka lead the seven match series 2-1, with next match to be played on December 7 at Comombo. 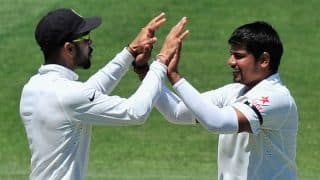