MS Dhoni along with Bhuvneshwar Kumar added 100 runs for the eight wicket.

India miraculously managed to gain a win out of jaws of defeat against Sri Lanka in the second One-Day International (ODI) at Kandy. Finally, it was India s most trusted player MS Dhoni who guided his side to a sensational win in alliance with Bhuvneshwar Kumar. Sri Lanka, once were on a rampage courtesy Akila Dananjaya, who rocked India s famed batting line-up with his maiden 6-for. In a long, long time we witnessed a topsy-turvy contest unlike the Test series and the first ODI, which were all one-sided affairs. With this 3-wicket win, India go 2-0 up in the 5-ODI series.

The chase began with another masterclass partnership between Shikhar Dhawan and Rohit Sharma on top of the order. Chasing a truncated target of 231 runs in 47 overs, Dhawan and Rohit got into the groove from over one. They cut, pulled, lofted and punched the ball to all parts of the ground to bring up their fifty-run stand in 45 deliveries.

Rohit took on Dushmantha Chameera in particular, smacking him for two back-to-back sixes in his first over. He reached his 32nd ODI fifty in 43 balls, only to fall for 54. Playing only his first ODI against India, Dananjaya nabbed Rohit with a leg-break. He second over saw him clean up Kedar Jadhav, Virat Kohli and KL Rahul, all bowled between bat and pad. He continued to wreak havoc getting Hardik Pandya stumped off a flighted delivery outside off.

Akila picked his sixth wicket in the form of Akshar Patel. Trying to fend a straight ball, Akshar was was trapped on the front foot. The witness to all this massacre was MS Dhoni, who stood at one end watching players come and go. Then, along with Bhuvneshwar Kumar, he provided some relief to the Indian side.

The pair slowly and sturdily added 50 runs for the eighth wicket with Dhoni doing most of the scoring. Bhuvneshwar went on to achieve his best score of 53* in ODIs; beating previous best of 31. His fifty came in 77 balls. The pair added exactly an unbeaten hundred as Dhoni remained unbeaten on 45.

Batting first, Sri Lanka were off to a steady start but their middle-order caved in. Some valiant batting from Milinda Siriwardana and Chamara Kapugedera saw the hosts reach 236 for 8. For India, Jasprit Bumrah claimed 4 for 43. 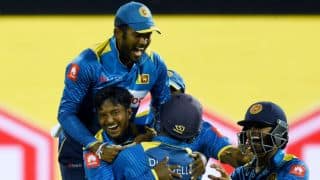