The match featured 19 boundaries in total, as a seemingly middling total of 134 for 5 proved to be a winning one.

A half-century from opener Stephan Myburgh and a disciplined bowling performance from the bowlers ensured Netherlands’ 18-run win over a spirited Nepal in the first T20I in Amstelveen. The tight contest featured 19 boundaries in total by the teams, as a seemingly middling total of 134 for 5 proved to be a winning one. Paras Khadka‘s unbeaten knock of 45 (off 42 balls) took his team, Nepal, closer to the target, but towards the end the required run-rate proved to be too steep. LIVE CRICKET SCORECARD: Netherlands s Nepal, 1st T20I, Amstelveen

Netherlands kept losing wickets when they batted, till the 12th over, after which a partnership of 63 facilitated a comeback and allowed them to put up 134 for 5. Among those wickets were also two run-outs. But No. 7 Michael Rippon provided stability to Myburgh at the other end, with a staid knock of a run-a-ball 25 that had no boundaries. Myburgh finished with 67 off 60 balls, with the help of six fours and a six. LIVE CRICKET UPDATES: Netherlands s Nepal, 1st T20I, Amstelveen

Nepal, similarly, lost early wickets. Opener Gyanendra Malla hit four boundaries in his 22-ball knock of 24. He found a solid partner in captain Khadka, and the duo put on 31 off 31 balls. After Malla got out in the seventh over, Khadka steered the chase amid wickets falling around him. But his efforts weren’t enough for his team in the end.

Nepal and Netherlands play the next T20I on Wednesday. 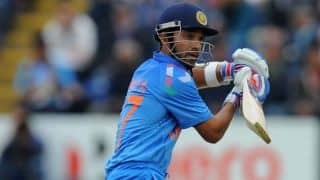