Hazlewood pointed out how Australia's youngsters have not been able to learn the ropes as much as they'd have wanted to without the duo around.

Fast bowler Josh Hazlewood believes the absence of Steve Smith and David Warner from international cricket in the last one year has left Australia s pool of young cricketers with a huge void in terms of learning. Smith and Warner, Australia s former captain and vice-captain respectively, were banned for 12-months following their involvement in the infamous ball-tampering scandal during the Cape Town Test in South Africa in March of 2018, without them, Australia struggled across all formats.

Smith and Warner were Australia s batting mainstays and without them, the middle order has continued to look fragile and weak. Since their suspension, Australia have lost bilateral ODI series to England, South Africa and India, in addition to losing a Test series to Virat Kohli and his men at home the first time in 71 years.

Hazlewood, Australia s ex-vice-captain, weighing in on the team s struggle, pointed out how the youngsters have not been able to learn the ropes from the duo s absence. Players such as Travis Head and Marnus Labuschagne have tried to soak the pressure of international cricket but haven’t progressed as much as they’d have wanted to without seniors Warner and Smith around.

“Every time Steve goes out to bat, he pretty much gets a hundred these days, so the time with the feet up is pretty important [for the fast bowlers],” Hazlewood told ESPNcricinfo. “It’s probably been the first time when you’ve had the top six with no real senior batsmen to feed off, I guess, around training and games, so they [the newcomers] have had to do all their learning from the coaches.

“It’s just so important to have those couple of senior guys when you bring those couple of young guys into the top six to learn from. You just can’t teach some things as coaches, you have to learn out in the middle batting with a senior person, so I think the other young batters will really feed off having them back.”

Smith and Warner went out of their way to prepare Australia s bowlers for the four-Test series against India. Smith and Warner agreed to turn out at the Australia nets to bat against the pace trio of Hazlewood, Mitchell Starc, and Pat Cummins.

“It was great to have them around – it’s better than bowling to a stump if no-one’s available,” Hazlewood said. “They were really keen to get in there and have a hit. I think all three quicks were there on one of the occasions and there was just me and Patty [Cummins] the other time.

“They’re class players and they really put you to the test and it really makes you get something out of the net session. They were a little bit rusty early on, it’s hard to prepare to face 140kph-plus if you haven’t been doing it, but you saw over the course of three or four overs how much improvement they had even in that short space of time, so there’s no doubt they’ll be ready to go when called upon.” 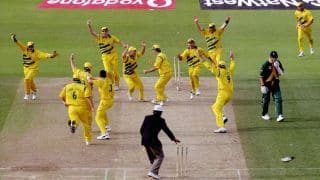