Steve Smith has been the backbone of the Australian batting lineup in ODI and Test matches for many years now. However, things have been difficult for him in the T20 format.

Colombo: Steve Smith has been the backbone of the Australian batting line-up in ODIs and Test matches for many years now. However, things have been difficult for him in the T20 format. The right-handed batsman has struggled to cement his place in the T20 teams at the international level and the Indian Premier League (IPL).

The Australian batsman would now like to change his fortunes in the shortest format of the game. He has been given the license to express himself freely in the middle during the three-match T20I series against Sri Lanka.

“I’m pretty excited that tag’s been taken off, to be honest with you,” Smith told cricket.com.au ahead of Australia’s Sri Lanka tour-opening T20I in Colombo.

Smith stated, “Diva (stand-in coach Michael di Venuto) actually told me the other day he said ‘we’re getting rid of that tag, that’s gone. Just go out and play freely. If you want to smack your first or second ball for six, go for it. And I’m like, yeah, that’s cool.”

“So now it’s just about going out and playing freely and trusting my instincts, which I think I’ve done well over any format for a long time, instead of being a bit more reserved and trying not to get out, which I don’t think the right way to play T20 cricket They’ve got rid of that ‘Mr. Fix-it’ tag,” concluded Smith.

The first T20I match of the series will be played on Tuesday at the R. Premadasa Stadium in Colombo and it will be interesting to see how Smith does his job now. 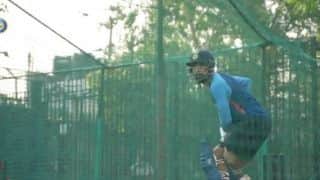 IND vs SA: Only A Few Tickets Left For 1st T20I, Here's How To Make The Last Minute Purchase