Smith kept a close watch on Sunderland's opponents and shared his insights with the batters.

A lot of brains behind Sunderland s progress to the final in the inaugural National Premier T20 Championships can be attributed to former Australia captain Steve Smith. During his time away from competitive cricket, Smith, currently facing a race against time to regain fitness after having undergone surgery seven weeks ago to repair a damaged ligament in his right elbow, took on the role of his local club Sunderland. (ALSO READ: ‘Steve Smith, David Warner will add a bit of spice to the World Cup’)

According to a report in cricket.com.au on Tuesday, Smith, who played for Sunderland earlier this summer while serving his 12-month suspension, kept a close watch on their opponents and shared his insights with the batters, which also includes Austin Waugh, the son of former Australia captain Steve Waugh, who was also present.

Smith, whose ban expires on March 28, is set to make a return in the glitzy Indian Premier League (IPL) which begins on March 23 which will be crucial to pave his way into the Australian team for the ICC World Cup 2019 and the five-Test Ashes campaign in November. 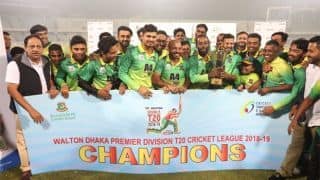