Steve Waugh: Virat Kohli ‘out of sorts’, but will be back with bang

Steve Waugh: Virat Kohli ‘out of sorts’, but will be back with bang

Former Australian skipper Steve Waugh believes that though the Indian skipper Virat Kohli is out of sorts , he will make a big comeback in the series against Australia.

Former Australian skipper Steve Waugh believes that though the Indian skipper Virat Kohli is out of sorts , he will make a big comeback in the series against Australia. Meanwhile, his younger brother and Australia national selector Mark Waugh had commented earlier that Kohli might be suffering from “brain fade”. In a live session on Facebook, Steve Waugh said, “Kohli seems to be a little out of sorts at the moment. It s the first time he s been under pressure for a while. Australia have had good plans to him as well (but) he s been a little bit muddled in his thinking. That s best shown by two of his dismissals where he let balls go against the spinners. That s something he never would have done even in his junior cricket days.” FULL CRICKET SCORECARD: India vs Australia, 2nd Test at Bengaluru

“That means he s [Kohli] not quite thinking 100 per cent, so Australia have got him a bit rattled at the moment. I think he s feeling the pressure of 1.3 billion Indians, wanting him to score runs and thinking he s going to every time.” Waugh added.

In India’s second innings, on Monday, Kohli could manage to score just 15 runs before falling victim to a controversial lbw decision. In this series, Kohli has scored just 40 runs at 10 in four hits, having been dismissed offering no shot twice; firstly to Steve O’Keefe in the first Test and then to Nathan Lyon in the first innings at M Chinnaswamy Stadium. Waugh said that the two dismissals against O Keefe and Lyon prove that Kohli is not at the top of his game at present and Waugh feels the pressure of expectations from the home fans have got the better of him.

While Australian skipper Steven Smith stands first, Kohli stands second on the International Cricket Council’s (ICC) Test batting rankings. Kohli had come up with a lot of confidence against Australia after registering double centuries in each of the India’s preceding four Test series. But his poor performance began in the first Test in Pune after he was dismissed by Mitchell Starc at his first ever duck on the Indian soil.

While Waugh believes that Australia had a top-level strategy against Kohli, he does not expect that Australia will be able to restrain him for too long. Waugh explained. “That was always going to be a key component of this Test series, how many runs Virat Kohli was going to score. So far Australia have (contained him) very well … but I expect him to score runs later on (in the series).” 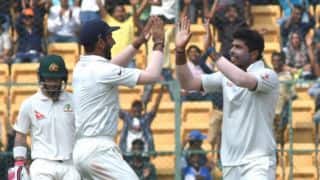