The Middlesex paceman had been in the wilderness, so far as Test duty had been concerned.

Birmingham: England fast bowler Steven Finn said it felt ‘fantastic’ to be back among the wickets in Test cricket after taking England to the verge of an Ashes victory at Edgbaston on Thursday. The Middlesex paceman had been in the wilderness, so far as Test duty had been concerned, after being dropped following an off-target spell in the 2013 Ashes series opener at Trent Bridge. That was arguably nothing compared to a wretched time on England’s woeful 2013-14 tour of Australia which saw Finn, struggling with his action and low on confidence, sent home early after then limited overs coach Ashley Giles declared him to be ‘not selectable’.

But, having taken two wickets in Australia’s meagre first innings 136, the 26-year-old Finn bagged five for for 45 in 13 hostile overs on Thursday’s second day to leave the visitors in dire straits at 168 for seven in their second innings come stumps a lead of just 23. England now have three days in which to seal a win that will put them 2-1 up with two to play in the five-match series. “To pull a Test shirt back on has been great fun,” said Finn, a protege of former Middlesex and England fast-medium bowler Angus Fraser, now an England selector. “There have been dark times along the way, but it makes those good times all the more satisfying. To be sat here and help put the team in this position, it feels pretty darn good to be honest with you.”

Australia opener Chris Rogers, who was Finn’s captain at Middlesex, recalled seeing the 6ft 7in Finn in tears during a county match at Edgbaston last season. “Every cricketer goes through ups and downs no matter how high or how low. To come out the other side, it’s a good feeling. It’s been a while since I played Test cricket so to get a five-for on my game back feels fantastic,” said Finn. He recalled in place of the injured Mark Wood after England’s 405-run thrashing by Australia in the second Test at Lord’s, stressed England still had much work to do if they were to win this match, amid concerns over the fitness of spearhead paceman James Anderson, who went off the field on Thursday with a side injury.

Australia on-tour selection chief Rodney Marsh certainly knows a thing or two about seeing Ashes Tests lost from improbable positions. Marsh, one of Australia’s greatest wicket-keepers, was involved in a stunning batting collapse at Edgbaston in 1981 where Kim Hughes’s men slumped to 121 all out chasing 151 as England, with all-rounder Ian Botham taking five for one in 28 balls, won by 29 runs.

“You d definitely need at least 150 plus, if I m being realistic,” said Australia opener David Warner, whose defiant 77 was a rare batting highlight for the Ashes-holders on Thursday when asked what would be a defendable total. Meanwhile left-arm fast bowler Mitchell Johnson, who started Thursday with two vicious rising deliveries to have both Jonny Bairstow and Ben Stokes caught behind as he became just the fifth Australian to take 300 Test wickets, said the tail “needed to wag”.

Australia, bidding to win their first Ashes series in Britain in 14 years, will resume Friday with wicket-keeper Peter Nevill 37 not out and Mitchell Starc seven not out. “We’re 23 runs ahead and we need to fight in the morning, we need Starc and Nevill to put on a hundred partnership. We’ve got to stop this rot, it’s not looking promising for us at the moment,” Johnson told Sky Sports. James Anderson in danger of missing rest of Ashes 2015 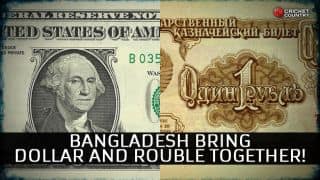