Finn sparked a dramatic collapse that saw Pakistan lose four wickets for just one run in 23 balls on Sunday when he had Misbah-ul-Haq, the tourists' captain and one of their senior batsmen, caught behind.

Birmingham: England coach Trevor Bayliss believes Steven Finn is returning to form after the fast bowler was back among the wickets in the third Test win over Pakistan. The Middlesex quick struck for the first time in the series when taking two for 38 in 13 overs on Sunday as England completed a 141-run victory at Edgbaston that saw them go 2-1 up in the four-match contest. Finn struggled for pace and accuracy as he went wicketless during Pakistan’s 75-run win in the first Test at his Lord’s home ground. FULL CRICKET SCORECARD: Pakistan vs England 2016, 3rd Test at Edgbaston

The 27-year-old was dropped for England’s series-levelling win at Old Trafford. But an injury to all-rounder Ben Stokes paved the way for his return at Edgbaston — with Finn having posted his Test-best innings haul of six for 79 at the Birmingham ground against Australia during last year’s Ashes. Finn sparked a dramatic collapse that saw Pakistan lose four wickets for just one run in 23 balls on Sunday when he had Misbah-ul-Haq, the tourists’ captain and one of their senior batsmen, caught behind.

He then produced another fine, full-length delivery to bowl obdurate opener Sami Aslam for 70 when the 20-year-old left-hander misjudged the line and had his stumps knocked over leaving the ball.  ALSO READ: Misbah admits PAK’s failure against ENG’s reverse-swing

“We’ve always thought he’s got a lot of potential,” said Bayliss of Finn. “I thought last year he bowled extremely well against Australia. “He was probably our best pace bowler in South Africa for the one or two Tests that he played there,” the Australian added.  “He’s been a little bit out of form, like a lot of players go through but I think, slowly over the last couple of games, we’ve seen him get more and more into rhythm and I thought he stepped it up again,” added Bayliss of Finn, who has now taken 122 wickets in 34 Tests at an average of under 30 apiece.

England were 103 runs behind on first innings at Edgbaston yet ultimately came back to win by an even larger margin. They now head to south London for the fourth Test at The Oval knowing they cannot lose the series at 2-1 up with one to play.  “It does give the guys confidence that they can win games from a little bit behind, that anything’s possible,” said Bayliss.

“I don’t think we were all that far behind — 100 runs or so. But we thought the wicket was still pretty good and in our second innings, if we batted big they (Pakistan) would have to bat last on that fifth day.”

If England win at The Oval and India fail to win the last two Tests of their series away to the West Indies, Bayliss’s team could replace his native Australia at the top of the world rankings. But whatever the statistics might suggest, Bayliss said England had plenty of work to do before they could be considered the best Test team in world cricket.

“I still think we are a little way off,” he insisted. But he took heart from the way the likes of Joe Root, as well as ‘junior’ batsmen Gary Ballance and James Vince, grafted for runs in England’s second innings at Edgbaston before a rapid century stand between Jonny Bairstow (83) and man-of-the-match Moeen Ali (86 not out) took the match beyond Pakistan’s reach.

“I thought the innings Root, Ballance, Vince (played) through that middle period of our second innings were doing the hard yards there. We spoke about having to do the hard yards and it would pay off later on in the innings, and that’s exactly how it turned out,” said Bayliss. 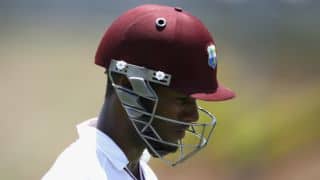