Steven Smith 239, Mitchell Marsh 181; Australia bat England out of contest before lunch, Day 4 of third As

Australia lead by 240 runs against England in the third Ashes Test.

Steven Smith could not reach his maiden triple-ton, and Mitchell Marsh walked back for his overnight score of 181. That, or anything, did not inhibit Australia from batting England out of the contest. Tim Paine and Pat Cummins took over and burdened more runs over England, taking 240-run lead before lunch on Day Four of the third Ashes Test.

Joe Root started with his best bowlers James Anderson and Chris Woakes from Day Three, saving Stuart Broad for the later overs. The decision worked as Anderson pinned down Marsh in the crease off the second ball of the day. In a bid to convert his maiden three-figure mark into a double-hundred, Marsh went for a referral but the replays showed that the ball would have hit the stump.

There still was Smith at the crease amidst the talks of him reaching his maiden triple-ton perhaps the only feat he is yet to achieve in his spectacular career. However, Anderson bowled a ripper of an away-swinger and trapped another Australia LBW: Smith shuffled but, this time, could not defend the ball in time.

The brief collapse added Mitchell Starc into the list. Miscommunication between Tim Paine and Starc led to the latter’s downfall.

At the crease are Paine and Pat Cummins who steadied the innings after Australia lost 3 wickets in 12 balls. The duo have added 82 runs thus far. 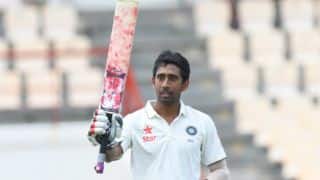 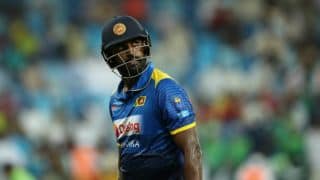