Steven Smith and Adam Voges were batting on 90 and 74 respectively, with the partnership between them worth 145.

Australia continued to dominate West Indies with ease, reaching a score of 473 for the loss of three wickets after 120 overs at lunch on Day Two of the second Test at the Melbourne Cricket Ground (MCG) on Sunday. Australian captain Steven Smith was batting on 90 in 131 balls, and had able company at the other end with Adam Voges approaching his second consecutive century in the series, and fourth overall, currently batting on 74 off 122 balls. The partnership between Smith and Voges was worth 145 at the end of the morning session, with the West Indian bowlers being made to look like amateurs as usual against some top-quality batting from the duo. LIVE CRICKET SCORECARD: Australia vs West Indies 2015-16, 2nd Test at Melbourne

Smith and Voges were quiet in the first few overs of the day, but began to flex their muscles once they settled at the crease, unleashing their rich arsenal of strokes against the hapless West Indian bowlers. West Indian skipper Jason Holder continues to be the most economical of the lot, though he did go for a couple of boundaries later in the session as his economy rate climbed to a shade over two. The visitors had a genuine chance in the morning when Voges edged to the slips off the bowling of debutant Carlos Brathwaite. Darren Bravo however, was positioned too wide for him to be able to complete the low catch, as the ball raced away towards the boundary. LIVE  UPDATES: Australia vs West Indies 2015-16, 2nd Test at Melbourne, Day 2

Smith and Voges completed their 14th and fourth half-centuries respectively during the course of the session, with Voges bringing up the milestone in exactly a 100 deliveries. Having failed to take a single wicket in the first session, the visitors desperately need a breakthrough at this stage if they are to avoid the game, as well as the series from completely slipping out of their hands by the end of the day. 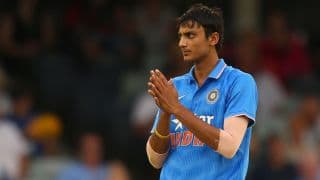