"I've never played in a one-day series where we've lost all five games. It's been a difficult task. We've been outplayed."- Steven Smith

Cape Town: Australia skipper Steve Smith has admitted that his inexperienced side was completely outplayed during the recently concluded five-match ODI series against South Africa. Speaking after the last match of the ODI series which Australia lost by 31 runs here, Smith said, I’ve never played in a one-day series where we’ve lost all five games. It’s been a difficult task. We’ve been outplayed. But the group has stuck together well. We’re always looking at ways we can improve … We just haven’t been able to go out there and do the business. We’ve had a pretty inexperienced side, to be fair. FULL CRICKET SCORECARD: Pakistan vs West Indies, 1st Test match

An explosive century from opener David Warner was not enough to prevent Proteas claiming a 5-0 whitewash as the curtain came down on a memorable ODI series for Faf du Plessis and his men. It should be noted that South Africa also became the first team to whitewash Australia in a five-match limited-overs series. The Australian skipper also stated that lack of runs from the batting order, aside from Warner, as a key reason his team was not able to win a single match.

We just haven’t been able to put enough partnerships together,” Smith was quoted as saying by ESPNcricinfo. Warner was the leading run scorer from either side, with 386 at 77.20 including two centuries, and he is now comfortably top of the ODI run list from all countries for the 2016 calendar year, in which he has made five hundreds. “We’ve had guys who have had starts and not been able to go on with it, he said.

Warner yesterday played a special knock, eventually falling for 173, but the Proteas did enough to secure a 31-run victory in a pulsating clash at Newlands. Chasing a target of 328, Australia were dismissed for 296. 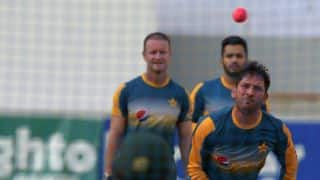