Hot Spot showed Nathan Lyon had clearly nicked a catch, but Nigel Llong ruled him not out.

Adelaide: Australian captain Steve Smith on Friday termed Nathan Lyon’s reprieve during the third cricket Test against New Zealand as a big error, an incident which proved to be crucial for the hosts’ triumph. On day two of the first-ever day-night Test, New Zealand thought they had Lyon out caught as he top-edged a sweep to Kane Williamson at the second slip, but standing umpire S. Ravi ruled that bat didn’t make contact with leather. New Zealand captain Brendon McCullum was certain they had got their man and immediately asked for a review and was shocked when third umpire Nigel Llong upheld the on-field decision despite evidence on Hot Spot showing a mark on Lyon’s bat. ALSO READ: ICC agrees to Nigel Llong mistake in Nathan Lyon DRS review during Australia vs New Zeealand day-night Test

The International Cricket Council (ICC) later ruled that while Llong followed the correct protocol, he made an incorrect judgment and Smith agreed that a mistake was made.

“I think it probably was out, yeah,” Smith was quoted as saying by cricket.com.au. “We saw it pretty clearly on the big screen and (Lyon) started walking off so I think that was a pretty big error.”

Australia were 116 for 8 at the time of the controversial decision, trailing by 86 runs on the first innings, with Lyon still yet to score and only an injured Mitchell Starc left to bat. Lyon went on to score 34 and Starc, on one foot, clubbed 24 off 15 balls to give Australia a crucial 22-run first-innings lead. 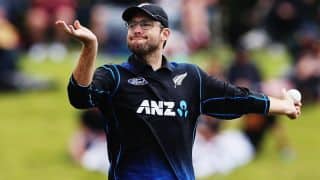