It all started with the second India vs Australia Test at Bangalore when Steven Smith looked up to the dressing room while in two minds to take the Decision Review System (DRS) for umpire s decision declaring him out.

As the Border-Gavaskar Series 2016-17 came to an end with India reclaiming the title, Australia captain Steven Smith apologised for his slip of emotions earlier in the series while talking to Ravi Shastri in the post-match conference of the fourth Test at Dharamsala after India clinched the series 2-1. It had all started in the second Test at Bangalore when Steven Smith had looked up to the dressing-room while in two minds to take the DRS for umpire s decision declaring him out albeit following a conference with Peter Handscomb. Later, Smith termed the incident as Brainfade while Indian skipper Virat Kohli had accused Australia in the press conference of repeating the act. LIVE CRICKET SCORECARD: India vs Australia, 4th Test at Dharamsala

Smith said in the post match conference about the chapter, At times I have been in my own bubble and have let my emotions slip. I apologise for that. But I have really enjoyed playing in this series and it has been a great learning curve for me as a captain and [for] our team as well. Smith marked the series as one of the best he has played and praised Indian team for their efforts. [This has been] A magnificent series, probably one of the best I have been a part of so far. I thought we have played some very good cricket throughout the series, we probably had our opportunities at times. But credit to India, they are a fantastic cricket side, particularly here at their own backyard. If you give them a sniff they are probably going to take it. Congratulations to India for winning the series 2-1.

It was a fantastic learning curve. For Australians, coming to India is one of the toughest places to tour and I think the way the guys were able to adapt and challenged India in these conditions was fantastic. The guys came here with some really good plans. I am really proud the way the boys performed here in India, Smith opined about the young Australian side giving tough competition to the hosts. 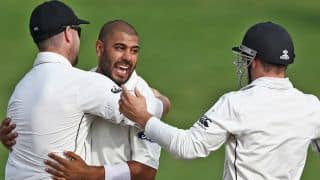