Australia are currently leading India 4-0 and the lure of a whitewash awaits them in the 5th ODI at Sydney.

Sydney: Ahead of the fifth and final One-Day International (ODI) on Saturday, Australia captain Steven Smith heaped praise on his teammates for giving their best and displaying a never-say-die attitude en route their 4-0 lead over India. Australia have won four matches in a row to take an unassailable lead in the five-ODI series. They beat India by five wickets in the first ODI, seven wickets in the second ODI, three wickets in the third match and 25 runs in the fourth and penultimate contest. Despite centuries from openers Rohit Sharma, Shikhar Dhawan and vice-captain Virat Kohli, the visitors could not avoid a defeat as poor bowling and a stunning batting collapse accounted for four consecutive losses for India. Cricket Scorecard: India vs Australia 2015-16, 5th ODI at Sydney

In the fourth and penultimate match in Canberra, India’s batting soared, aided by centuries from opener Dhawan, and No.3 batsman Kohli, but suffered a dramatic collapse, losing nine wickets for 46 runs to nosedive to an embarrassing defeat on Wednesday. READ: India vs Australia 2015-16, 5th ODI at Sydney: Likely XI for the visitors

“There’s no doubt that Wednesday night’s win over India at Manuka Oval was one of the best that I’ve been involved with as an Australia player, given the circumstances we found ourselves in and the top-shelf quality of our opposition,” Smith wrote in a column for Cricket Australia on Friday. ALSO READ: India seek to avert whitewash against Australia in 5th ODI at Sydney

“It wasn’t looking great for us when India were 1-277 and them needing 72 to win at less than a run per ball. You generally see a batting side get home quite easily from that position, but great credit to our boys and their ‘never-say-die’ attitude,” he said. Smith said the hosts knew if they could get rid of Dhawan and Kohli in the fourth ODI, the middle order did not have the experience to see the visitors through.

“As Shikhar Dhawan and Virat Kohli kept building their partnership, our plan was always that a wicket or two might really change the complexion of the match but getting that breakthrough was proving to be pretty tough. They just kept finding the boundary rope, and out there in the middle it just felt like every time they hit the ball it went into a gap. That’s how well they were both playing,” he said.

“But we also knew that India’s middle-order batting was quite inexperienced with a few guys making their international debuts in this series, so we thought if we got a wicket or two we could put some pressure on and perhaps squeeze them a bit,” the 26-year-old opined. Following the ODI series, India will play the hosts in the three-match Twenty20 International (T20I) series starting on January 26 in Adelaide.

Speaking about the upcoming T20 series, Smith said, “Once the VB Series is completed on Saturday, we turn our attention to the three KFC T20s against India starting in Adelaide on Australia Day – which is also the day that India celebrates its Republic Day – and those games will be a crucial part of our preparation for the World T20 in March.”

“That should be a fantastic day at Adelaide Oval on Tuesday, given the dual national celebrations and the fact that South Australian fans will no doubt turn out in force as they usually do to make it a memorable occasion,” Smith concluded. 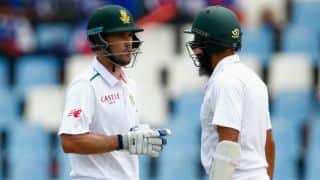