Smith denied that Lehmann had too much influence and insisted he had decided when to declare, not the coach.

He even suggested Lehmann had decided when Australia declared against India in the Boxing Day Test, when Smith was standing in for injured skipper Michael Clarke. “He’s got to be a little bit careful –- he’s got to stop walking out on the MCG and declaring. He’s got to remember that that’s the captain’s job and not the coach’s job,” Warne said on radio station 2GB.

But Smith denied that Lehmann had too much influence and insisted he had decided when to declare, not the coach. “I think Boof [Lehmann] was sitting on the sideline where he tends to sit to watch the match. I was up the top trying to call the guys in but they couldn’t see me. I think he said ‘look up there, he’s calling you in’,” Smith said.

“I think they showed him on the TV doing it but I was up the top calling them in — it was me,” Smith said the belief that Lehmann had too much power was only coming from outside the Australian dressing room.

“Everyone that was playing that Test match knew what was going on, knew that I made the declaration. Look I think Boof’s done a terrific job around the team as coach, done a great job of getting the players together — we’re in a good place. But it’s exclusively up to the captain what goes on out there [on the field]. The captain’s the one that runs the ship,” he said.

Smith said Australia’s World Cup wash-out against Bangladesh at the Gabba on Saturday would not affect the team’s preparation for their crucial match against New Zealand in Auckland next weekend.

“We’ll be fine, we’ve been playing a lot of cricket and a day off’s probably not the worst thing. We’ve prepared well throughout the tournament and we’ve got a few days training before we go there so we’ll be fine,” he said. He said he had been impressed by New Zealand’s play during their rout of England on Friday, a win which gave the Black Caps a third successive win.

“I saw bits and pieces of the match. I thought they bowled really well. I don’t think England played all that well at the same time, but New Zealand are a tough opposition and they play very good cricket in their own backyard. We’re going to have to play at the top of our game to beat them,” Smith said. 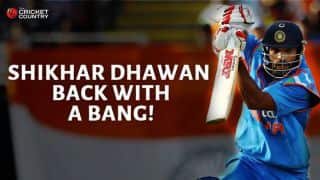