Steven Smith joined the greats Wednesday as he plundered India‘s bowlers for his fourth century of the series in Australia‘s mushrooming first innings on the second day of the final Test in Sydney. The Aussie skipper became only the fourth batsman along with Don Bradman, Sir Everton Weekes and Jacques Kallis to score tons in four consecutive Tests in the same series.

He added his latest 117 to his unbeaten 162 in Adelaide, 133 in Brisbane and 192 in Melbourne in this series. At lunch, Australia were 420 for four with Shaun Marsh not out 14 and newcomer Joe Burns yet to score. Bradman scored his centuries against South Africa at home in 1931-32, while Kallis compiled his hundreds against the West Indies in South Africa in 2003-04.

Smith was finally out 20 minutes before lunch when he was caught behind off Umesh Yadav ending his 208-ball knock spiced with 15 fours. He has 698 runs in the series at an average of 139.6, placing him third behind Bradman (715) and Ricky Ponting (706) for most runs in a series against India.

Smith is having an extraordinary run and has now scored six centuries in the first innings of his last seven Tests at home. Watson again missed out on what would have been only his fifth Test century when, on a flat SCG wicket, he had another brain snap and hoisted Mohammed Shami straight to Ravichandran Ashwin at deep midwicket for 81.

Watson has now scored 24 half-centuries but just four tons into his 56th Test match, with his last Test hundred coming against England in Perth in December 2013. He toiled for 250 minutes and faced 183 balls in putting on 196 runs for the third wicket with Smith.

India’s bowlers were finding it hard going on the unresponsive SCG pitch with Shami taking two for 80 off 23 overs and Ashwin getting some turn with one for 98 off 37 overs. India have already lost the Border-Gavaskar Trophy with Australia holding an unassailable 2-0 lead following wins in Adelaide and Brisbane. The tourists have won only one of their last 22 Tests overseas and have been successful in only one of their 10 Tests at the Sydney Cricket Ground, that sole victory coming 37 years ago. 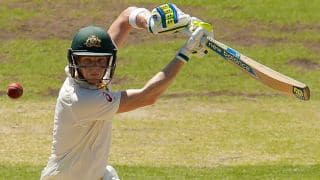