After a forgettable ODI series, Australia will head to the T20I series at Ranchi beginning on October 7.

India triumphed in the ODI series by 4-1. Australian batsmen squandered throughout the series, despite the return of their limited-overs specialists batsman Aaron Finch. Steven Smith could not have put the loss in better words lack of consistency. Smith stressed upon the batting collapse throughout the series. Apart from David Warner and Finch s early start, none of the batsmen could capitalise on them. In the final ODI as well, Australia were once again led by Warner s half-century. However, a collapse was witnessed from 66 for 0 to 118 for 4. But Travis Head and Marcus Stoinis resistance held the Australian batting line-up.

Speaking in the post match press-conference, Smith added more light to the matter, “Probably lacking consistency with the bat I’d say … I think we’re losing wickets in clumps very consistently and that’s not good enough. We probably didn’t adapt as well as we would have liked. Smith was also unhappy with himself too, I wasn’t feeling great at the start of the series to be honest. I wasn’t holding the bat the way I would have liked to. As the leader of the team it’s been disappointing but I guess sometimes that’s cricket. You have those periods where you’re not getting the scores you like. It’s something hopefully I can turn around and hopefully contribute in the T20s.

Smith also pointed out on poor decisions that cost Australia the series, We’re just not taking our words out in the middle and doing it with actions. We have glimpses of it and we play well in periods and then we just get ourselves in trouble. Probably from poor decision making under pressure, that’s what I probably put it down to. That’s something that we need to improve on because it’s not good enough.

After a forgettable ODI series, Australia will head to the T20I series at Ranchi beginning on October 7. 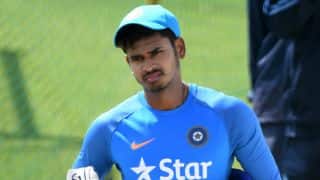 Shreyas Iyer, Rishabh Pant to lead India A in ODIs against New Zealand A