Australia managed to reach a total of 255 for 8 in the first ODI against Pakistan played at Sharjah on Tuesday. Batting first, Australia had a pale start to the innings. Aaron Finch who came out to bat smacked a length ball straight to the point fielder. David Warner and and Steven Smith started slowly and took no chances early in the innings. Mohammad Irfan who got Finch out was phenomenal with the new ball as he bowled two consecutive maiden overs. On the other hand Wahab Riaz, bowled good length deliveries but sprayed on the leg side too often. After 15 overs Australia had just reached a neat score of 62 for 1.

Smith started accelerating from that 18th over which Irfan bowled. He collected two boundaries from that over and stamped his authority. It was quite evident that Smith was in great form today. Warner complimented him well with some good looking shots all over the ground but fell to Afridi without completing his half-century.

The captain of the Australian side, George Bailey came out to bat and he was immediately welcomed with a Lbw appeal from Afridi which was turned down by the umpire and later by the third umpire after a unsuccessful review. He too left early after hitting a big six.

Glenn Maxwell who came next looked rusty and pale with the bat and was dropped twice before getting out. Meanwhile Smith kept on scoring consistently and reached his half-century. He had already hit four boundaries and one big six. James Faulkner was sent on to bat at the No. 6 slot but he got out after scoring 11 runs from 20 deliveries.

The run-rate totally took a downward leap after Steven Smith left. The Pakistani bowlers did a good job as they either bowled the slower deliveries or bowled a yorker in the death overs. Riaz was quick, continuously metered above that delicate 140 kph mark. Brad Haddin kept scoring with a decent strike rate but that big death overs weren’t visible. But the start which Smith and Warner gave deserved a better ending.

Mitchell Johnson provided some cool breeze as he smothered three boundaries in the last over before getting bowled by Riaz.

Australia would have wished for a better score taking in account the heroic knock played by Steven Smith. He became the third Australian batsmen to score a century in Sharjah after Dean Jones and Micheal Bevan. 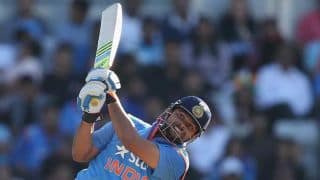 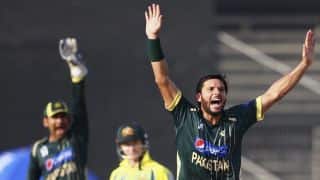