England took four wickets in the session to hurt Australia.

A flurry of wickets towards the end of the morning session allowed England a foot into the contest as Australia tumbled to 376 for 7 at lunch on the second day of the fifth Ashes Test at The Oval. Steven Smith reached his 11th Test century, helped by a reprieve when he edged Steven Finn behind off a no ball. His partnership with Adam Voges, worth 146, ended when Voges fell leg before wicket to Ben Stokes, for England’s first wicket in the session, after the first hour. Mitchell Marsh, the next man in, edged Finn to slips, handing the lanky fast bowler his 100th Test wicket. Peter Nevill and Mitchell Johnson, then, were ensnared by off-spinner Moeen Ali. LIVE CRICKET SCORECARD: England vs Australia, 5th Test, The Oval, Day 2

Smith got his boundaries via drives and punches, and got his second six of the innings (the first was scored on the first day) with a lofted drive off Ali. He scored four boundaries in the session, and otherwise left balls alone or pushed the ball to the fielders or the gaps. He had greedily chased a wid-ish ball from Finn, the type he put away for fours, only to get an edge through to the wicket-keep. He was on his way back to the pavilion, but when the umpire Aleem Dar paused to revisit the landing of Finn’s foot in his delivery stride, it was found out he had overstepped. The no-ball was a big one, literally and metaphorically, as Smith looked heavenwards and came back to the wicket to resume his innings. He was then on 92; he resisted dramas to gradually inch his way to is century. LIVE CRICKET UPDATES: England vs Australia, 5th Test, The Oval, Day 2

He, however, witnessed wickets tumbling around him. While Voges was done in by a sharp delivery from Stokes that thudded into his pads, Marsh was caught behind for 3. Peter Nevill stuck around to score 18, before deciding to go after a short ball from Ali, and edging behind on the leg side. His replacement in the middle, Mitchell Johnson, was defeated by a flighted delivery from Ali, and got bowled, after which the teams strolled off for lunch. Ali’s late scalps gave him three wickets for the innings. 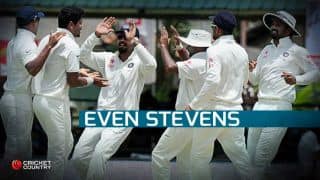 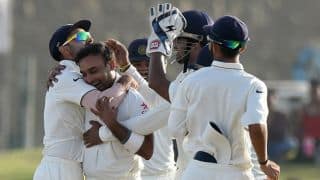 POLL: Which Indian bowler bowled the best on Day 2 of India vs Sri Lanka 2nd Test at Colombo?