Aaron Finch is currently sidelined with a broken foot.

Steven Smith has confirmed that he has no plans to lead the side in all three forms, meaning Aaron Finch will continue to captain the Australian Twenty20 team. They will lock horns with the English side in the one-off T20I at Cardiff as a part of their ongoing tour. However, since injured Finch is unavailable for tomorrow’s game, Smith who has made the domain of T20 captaincy “belongs” to the former will lead the side. It is a vital game for the visitors who are still fresh from a 23-run Duckworth-Lewis victory over Ireland in a one-day clash last Thursday in Smith’s full captaincy debut. Poll: Who will win one-off T20I between Australia and England at Cardiff?

According to a report from Cricket Australia, when asked the 26-year-old if he would be taking up the skipper’s role for the T20Is as well along with the Test and One-Day International, he made it clear that the job belongs to Finch. “No, it’s Finchy’s team actually. It takes a bit of weight off my shoulders, I guess, in this form of the game. Finchy is going to lead this team going forward, (this match is a) one off for me going forward.”

Finch, who was announced as the T20 skipper in August last year, is sidelined with a broken foot he suffered playing for English county side Yorkshire this winter. The injury came on the back of a serious hamstring problem he suffered playing for Mumbai Indians in the Indian Premier League. READ: England vs Australia 2015, one-off T20I Preview: After attrition, it is time for muscle

When enquired about Australia’s T20 deputy if Smith would get the role or Tests and ODIs vice-captain David Warner would take over, he said: “”I don’t know … I’m not sure if they’ve actually appointed a vice-captain for that,” Smith said. So (it’s a) one off here in Cardiff (and) hopefully we can get another win.” 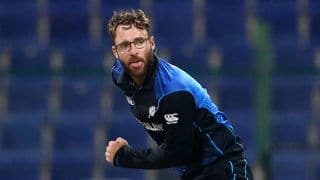 Mahela Jayawardene: Cheteshwar Pujara’s innings may be the defining moment of India vs Sri Lanka 2015 series