Ireland will look to bounce back against Australia after losing to South Africa by 206 runs.

Australia skipper Steven Smith has confirmed fast bowler Daniel Worrall will make his One-Day International (ODI) debut against Ireland in the one-off match. Australia begin their tour of South Africa with this match, after which they will be playing a five-match ODI series against the hosts, which will begin at Centurion on Friday. Worrall will be Australia 214th ODI player. Australia coach mentioned that the three uncapped bowlers Worrall, Joe Mennie and Chris Tremain will make their Australia debuts at some point of time. The other two quicks will have to wait a while more to earn the Baggy Green. They may perhaps play against the Proteas in the ODI series.

“He [Worrall] has worked very hard and he’s improved a lot over the last couple of years,” Smith said at the conclusion training session. “I think he’s got a lot stronger and he’s bowling with good pace and good shape. “This series will be a good challenge for him, with Ireland tomorrow and then South Africa in this series in their conditions. “I look forward to seeing how he, along with all the other quicks, will go,” according to cricket.com.au. Worrall will be entrusted to fill in the shoes of Mitchell Starc, who has been rested for the series, after a good show in Sri Lanka. Opener Aaron Finch too will not feature as he recovers from a finger injury, which he sustained in Sri Lanka. Finch as a result did not play the T20I series in Sri Lanka, which gave Glenn Maxwell a chance to exhibit his skills at the top. Smith says that he caught a bit of Sunday’s match, where Ireland were thumped by South Africa by 206 runs.

“We’ve had a little look at them,” Smith said . “Their top-order is the most dangerous in their batting.  [Paul] Stirling and the captain [William] Porterfield, they like to get them off to a good start so they’re going to be the big scalps for us.”

“Hopefully we can play the way we play and put on a good show tomorrow. It looked like South Africa played pretty well [yesterday] and it looked like the wicket was quite slow. A little bit tacky in the morning, and there’s quite a lot of breeze here compared to other places we’ve been practising. It looks like it’s a pretty small ground so hopefully a big total for us tomorrow,” he added. 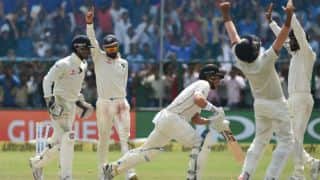 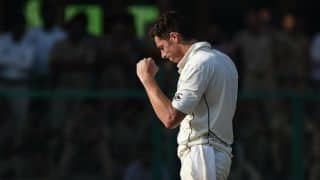