Test cricket is proving ridiculously easy for Steven Smith at the moment as the new skipper’s golden run of form brought India to their knees in the third Test on Saturday. Smith pummelled the tourists for his third century of the series with a highest score of 192 to lift his batting average to 51.26 in his 25th Test match.

He was so much in the zone that he was able to uncork some of his imaginative shot-making to leave his Indian counterpart M.S. Dhoni scratching his head as to where to position his fielders to stop the run avalanche.

It is all happening at a rapid rate for Smith, who won his first Test as skipper in Brisbane last week since taking over from the injured Michael Clarke and the runs just keep on coming. In five innings in this series Smith has amassed 567 runs for three times out at an average of 189.

“It was pretty fun to be honest. Batting in general is always fun though so it was nice to be able to play a few shots there at the end and try and get the total up as high as we could,” Smith said.

So dominant was Smith late in his 433-minute innings that Dhoni had fielders ringing the boundary rope to prevent more scoring carnage, yet the Aussie skipper still found ways through and — in some cases — over them.

Smith struck 15 fours and two sixes off 305 balls and it was only his desire to plunder more runs ahead of a planned declaration at tea that cost him his wicket in a chanceless knock.

In the end he threw away his wicket going for a big heave off Umesh Yadav to lose his stumps with only the wicketkeeper and bowler anywhere near him. “I feel pretty good at the crease. Everything is working for me at the moment which is nice and the most pleasing thing is that we’ve got 530 runs on the board and that’s a very good first innings total for us,” he said.

Smith has scored 1,132 runs this calendar year at 87.07 but ranks fifth overall behind leader Sri Lanka’s Kumar Sangakkara (1,492). This year Smith has scored five Test centuries and he is the first Australian to pass three figures in each of his first two Tests as captain. 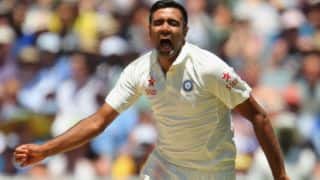