Steven Smith was dismissed by Jasprit Bumrah, while George Bailey was dismissed by Rishi Dhawan in the fifth One-Day International (ODI) between India and Australia at the Sydney Cricket Ground (SCG).  The debutant Bumrah — India’s fourth debutant in this series so far after Barinder Sran, Gurkeerat Singh, and Rishi Dhawan — managed to take the huge wicket of India’s bane Smith and Rishi followed it soon after with the scalp of the in-form Bailey. Australia were in trouble at 78 for 3 in the 15th over after Bumrah and Rishi struck. It was the maiden international wicket for both players. Bumrah took the wicket in his first match, but it was Rishi’s third ODI. Live Cricket Scorecard: India vs Australia 2015-16, 5th ODI at Sydney

India started well with Ishant Sharma getting the wicket of Aaron Finch in the very first over of the match. Finch hit Ishant straight down the ground for a boundary off the fourth ball of the match but was dismissed in the same over when he was hit on the pads after leaving a ball on off. The umpire adjudged him out LBW, but the replays showed that the ball would have actually missed the stumps. David Warner and Smith then went about rebuilding, and added 58 for the second wicket before Smith mis-hit a pull shot to Rohit Sharma off Bumrah. Bailey and Warner then put on 14 before Bailey got a leading edge and was caught by Ishant off Rishi. Live Cricket Blog: India vs Australia 2015-16, 5th ODI at Sydney 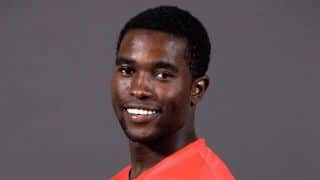