Steven Smith reached a well deserved century of 115 balls and took Australia to a respectable position in the first ODI match against Pakistan played at Sharjah.

Smith will be the third Australian batsmen to score a century in Sharjah after Dean Jones and Micheal Bevan.

He came on to bat when Australia lost wicket with no runs on board. Then Smith came with his calm and clear attitude and started nudging the balls for singles and doubles. He looked in no hurry to blast from the start but instead kept floating runs. He came up with big blows in regular intervals. His knock included fashionable cover drives and muscular sixes. 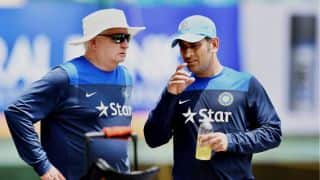