Steven Smith stepped down from Australia's captaincy ahead of play on Day 4 of Cape Town Test.

Steven Smith has been handed a one-Test suspension by the International Cricket Council (ICC) after his role in ball-tampering scandal. He has also been fined 100 per cent of his match fee following his admission off Australia’s attempting to change the condition of the ball in order to gain an unfair advantage during Day Three of Cape Town Test against South Africa. Cameron Bancroft, however has been handed three demerit points and fined 75 per cent of his match fees.

According to ICC press release, CEO David Richardson said: “The decision made by the leadership group of the Australian team to act in this way is clearly contrary to the spirit of the game, risks causing significant damage to the integrity of the match, the players and the sport itself and is therefore serious in nature. As captain, Steve Smith must take full responsibility for the actions of his players and it is appropriate that he be suspended.”

Match referee Andy Pycroft also said: To carry a foreign object on to the field of play with the intention of changing the condition of the ball to gain an unfair advantage over your opponent is against not only the Laws, but the Spirit of the game as well.

That said, I acknowledge that Cameron has accepted responsibility for his actions by pleading guilty to the charge and apologising publicly. As a young player starting out in international cricket, I hope the lessons learned from this episode will strongly influence the way he plays the game during the rest of his career.

The ongoing Test is being led by Tim Paine after Smith and his deputy David Warner stepped down from their roles midway into the match. 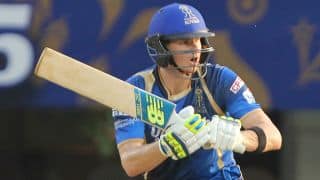