Steven Smith and James Faulkner stunned Royal Challengers Bangalore (RCB) as Rajasthan Royals (RR) won by five wickets in the Indian Premier League (IPL) 2014. The duo struck a quick-fire 85-run partnership to chase down a massive 191-run target at the M Chinnaswamy Stadium on May 11. Smith and Faulkner hammered 65 runs in the last 17 deliveries of the innings. Smith finished on an unbeaten 48 off 21 deliveries with four fours and four sixes. Faulkner struck the winning runs with a six to end his innings on 41 off 17 deliveries. He hit three fours and three sixes.

When Faulkner joined Smith in the middle, Rajasthan were at 106 for five. But the duo hit boundaries at will to guide Rajasthan to their sixth win in nine matches. They now consolidate their third position in the IPL 7 Points Table. Rajasthan have 12 points. Bangalore now have six losses in nine matches and are in sixth place in the standings. They only have six points and a spot in the play-offs looks ever more unlikely.

It was always a daunting target for Rajasthan, but the Australian power-hitters down the order helped them to get back to winning ways. Ajinkya Rahane and Karun Nair began the run-chase for Rajasthan. Albie Morkel bowled the first over for Bangalore. He bowled a length delivery and Rahane edged the ball over Chris Gayle at wide first-slip for a four. That was also the first runs for Rajasthan. Mitchell Starc bowled the second over. He bowled a tight over giving away only four runs in total.

Ashok Dinda was brought to bowl the fourth over. It was a good over, but the last delivery took the inside-edge off Nair’s bat and went for a four through fine-leg. Kohli decided to bring Varun Aaron on in the fifth over. He bowled a short and wide delivery and Rahane cut the ball over point for another four. Dinda then bowled a length delivery outside off-stump and Nair drove the ball over cover for a four. The ball almost flew for a six, but bounced just in front of the boundary.

Yuvraj then bowled the first over after the powerplays. Nair reached forward and slog-swept a length delivery over mid-wicket for a four. Yuzvendra Chahal then struck on his first ball in the seventh eighth over. The ball skidded straight through and Rahane bottom-edged it to Parthiv Patel behind the wickets. Nair then played a late-cut to a wide delivery from Chahal and got a four through third-man.

Nair then miscued one high in the air, but the ball fell safely in-between deep cover and point. Yuvraj continued and bowled Watson for one run. He bowled a straight good length delivery and Watson missed with his cut shot. Watson’s wicket brought out wild celebrations from the Bangalore players.

Local boy Stuart Binny soon followed as he sliced one to Rilee Rossouw at deep-cover for one run. Yuvraj got his second wicket. As the required run-rate was increasing, Sanju Samson decided to score a few boundaries. He sliced one from Yuvraj over deep extra-cover for a six in the 11th over. The next delivery was cut for a four in front of point. But Samson played a half-hearted shot back to Yuvraj on the last ball of the 11th over. He was out for 13 runs off eight deliveries.

Nair then came down the track and lofted one from Chahal down the ground for a four. He then reached his half-century in the 13th over. Nair then flayed one from Starc towards extra-cover, but Yuvraj, after the match he was having, dropped a difficult chance. Nair then top-edged a good length delivery from Starc over Parthiv for a four. Steven Smith then came down the track and drove one from Yuvraj over deep extra-cover for a six.

Then Nair came down the track, but missed a straighter delivery and was bowled for 56 runs. That was Yuvraj’s fourth wicket. He finished with figures of four for 35 in his four overs. Smith then struck two fours and one six off Aaron in the 15th over. Chahal then ended his full quota of overs with one wicket for 24 runs.

Starc bowled a full and wide delivery and James Faulkner opened the face of his bat and hit the ball over cover-point for a four. Starc then bowled a straight delivery and Faulkner top-edged the ball over Parthiv for his second four. Faulkner then launched a good length delivery from fellow Australian Starc high over deep mid-wicket for a six.

Dinda was brought back into the attack in the 18th over. Smith drove the first delivery over long-off. The second delivery was hit towards wide long-on for a four. Both were half-volleys. The third delivery was a yorker outside off-stump and Smith squeezed it behind point for a four. Dinda then bowled a front-foot no-ball and Smith hammered the ball down the ground for a flat six. Dinda conceded 23 runs in that over.

Aaron bowled the 19th over. Faulkner pulled a length delivery high over deep mid-wicket for a six. Faulkner then hit a wide full-toss through point for a four. Aaron then bowled a waist-high full-toss and Faulkner pulled the ball high over fine-leg and clinched the win for Rajasthan. Faulkner was adjudged as the Man of the Match.

Earlier, Bangalore posted a massive total of 190 for five in their 20 overs. Yuvraj Singh scored a magnificent innings of 83 from only 38 deliveries with seven fours and seven sixes. AB de Villiers struck a 32-ball 58 with one four and five sixes. The duo shared a 132-run stand for the fourth wicket at a run-rate of 12.18. Almost all of Rajasthan’s bowlers took a pounding. Kane Richardson did manage to take two wickets. 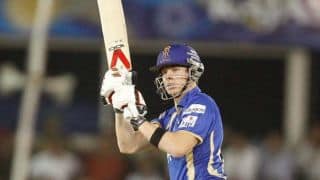