Joe Burns and Steven Smith got past their respective milestones as Australia attain a commanding position at Tea on Day 2.

Australia post -lunch have looked in total control as Joe Burns and Steven Smith stockpiled runs at will in the second session of Day 2 in the 2nd Test against New Zealand at Christchurch. Burns who had already made a half-century went on to scored his third Test ton in just 190 balls(slow going by BAZ’s standards). Burns struck two blistering boundaries of Matt Henry in the 63rd over, to get to his ton. Smith, on the other hand has looked to be at complete ease while bringing up his 16th Test half-century in 93 balls, hitting six four’s in the process. Both Smith and Burns also brought up their 150th run stand in 248 delivers coming in together at 67/2. Going into tea on Day 2 Australia are in the boxing seat with Burns (126*) and Smith (79*) cashing on a plan-less New Zealand bowling attack at 241 for 2, trailing by 129 runs. LIVE CRICKET SCORECARD: New Zealand vs Australia, 2nd Test at Christchurch

Coming into this session, Brendon McCullum has tried everything at Burns and Smith, with Corey Anderson and Henry dishing out short pitched deliveries. Burns did manage to give a top edge while pulling that went above the keeper. Anderson has kept on bowling at just out-side the off stump, asking the batsmen to drive on the up, which did manage to find a few edges off the bat, which ended up either  falling short at slips or finding gaps to get through to a boundary. Smith was hit by a Wagner bouncer in the very last over before tea, as he looked a bit shaken up from it.

Burns and Smith had managed to undo all the good work done by New Zealand bowlers in the early one hour of play, where Australia added just 36 runs  for the loss of one wicket of Usman Khawaja in 15 overs. Burns starting from his over night score of  27 got to his first ever overseas Test half-century in 123 balls. Boult was the only star of the day for New Zealand, picking up Khawaja’s wicket. 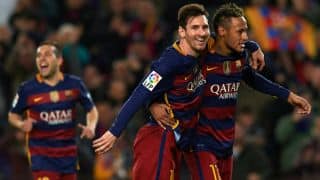 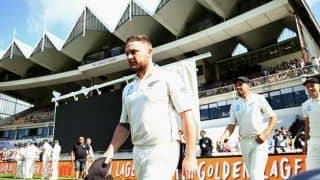