The Australians, leading by just 22 runs going into the fifth day, mustered a 181-run quickfire lead before declaring and bowling out Pakistan in just 53.2 overs to grab a famous victory.

Winning skipper Steven Smith paid tribute to Mitchell Starc’s match-turning impact to spur Australia to a sensational last-day series victory over Pakistan in Melbourne on Friday. The Australians, leading by just 22 runs going into the fifth day, mustered a 181-run quickfire lead before declaring and bowling out Pakistan in just 53.2 overs to grab a famous victory. Starc spearheaded the final day turnaround, slamming 84 runs off 91 balls with seven sixes before taking four wickets for 36 off 15.2 overs to help skittle the tourists for 163. “I thought Starcy was incredible. I thought he batted incredibly,” Smith said. “He broke the record for the most sixes at the MCG, and hit the ball incredibly cleanly to give us an opportunity to get 180 and have the overs that we did at them today. It was pretty special.

“What Starcy s done was world-class. Starc’s seven sixes surpassed the record in an innings in a Melbourne Test held by Andrew Symonds with six in his 72 against South Africa in 2005. Smith said it was a remarkable effort by his team to get up after Pakistan had batted for the most part of the first three rain-disrupted days to set a first innings total of 443. It s got to be right up there. I said to the boys this morning that cricket s a funny game, and anything can happen,” the captain said. “The plan this morning was to bat for the first 40 minutes and hopefully lose no wickets and then be able to put our foot down and get a bit of a total to have a crack at Pakistan today. To come out and do what we did – we always thought if we could get three or four wickets, when we got the ball reversing we d be in with a show.”

Smith also had praise for maligned off-spinner Nathan Lyon, who grabbed the crucial wickets of Younis Khan, captain Misbah-ul-Haq and in-form No.6 Asad Shafiq to crack the game wide open. “A lot of credit has got to go to Nathan Lyon. I thought he bowled beautifully this afternoon,” Smith said. “He mixed up his seam, the way he was bowling he bowled a lot of cross-seam balls today, which I guess put a bit of doubt in the Pakistan batters minds. He came up with the crucial wickets to get us in a good position for when the ball started to reverse.” Smith said the come-from-behind win was significant for his young team s confidence.

I think it can give you that belief to know that you re never out of the game or you can pull a win out of your hat from nowhere,” he said. “It was quite remarkable the way we were able to do that today. Everything just went to plan. It was just one of those days. I m just incredibly pleased and hopefully the guys can take a lot of confidence out of how they ve played this week. 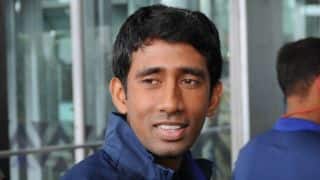 Wriddhiman Saha: Have never let success go into my head