Australia took an extra 26 minutes to bowl their 50 overs against India in the 2nd match of the tri-series.

Melbourne: Jan 19, 2015
Steven Smith is likely to captain Australia in the next One-Day-International (ODI) of the tri-series against England in Hobart on Friday as George Bailey faces a possible suspension from the International Cricket Council (ICC’s) due to his side’s slow over-rate in the four-wicket win over India at the MCG, on Sunday. This is Australian stand-in ODI captain Bailey’s second slow over-rate within 12 months and as per an ICC statement in November both Bailey and South Africa captain AB de Villiers would face suspension if they were in charge for further over-rate offences in the next year.

Incidentally, the ICC issued the statement after both Bailey and de Villiers were fined for slow over-rate during the first ODI between Australia and South Africa in Perth on November 14. “If Bailey and de Villiers are found guilty of one more minor over-rate offence in ODIs over the next 12 months, they will receive a one-match suspension as per the provisions of the ICC Code of Conduct for Players and Player Support Personnel,” the ICC statement said in November.

Under stand-in captain Bailey, who took charge in the absence of an injured Michael Clarke, Australia took an extra 26 minutes to bowl their 50 overs against India in the second match of the tri-series at the MCG here. According to a report in ESPNcricinfo, Smith in all likelihood will lead the side in the next match if Bailey is suspended as Clarke is still to recover from his hamstring injury. 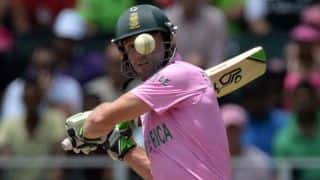 AB de Villiers’ record 100: Do not imitate at home 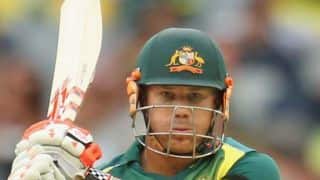