Alastair Cook's wicket at the stroke of Tea was a boost for Australia.

With an aggressive partnership of 91 between Steven Smith and Mitchell Starc, and the wicket of Alastair Cook at the stroke of Tea, Australia have completed a productive post-lunch session on the second day of the fifth and final Ashes Test at The Oval. England’s bowlers took four quick wickets to hurt Australia after a one-sided first day, in the second half of the opening session, but Smith and Starc took them close to 500, before both departed within an over of each other. Australia were eventually bowled out for 481, and despite facing attack from England’s openers, took the upper hand as off-spinner Nathan Lyon got flight and turn to breach the defences of Cook, and get his stumps disturbed. LIVE CRICKET SCORECARD: England vs Australia, 5th Test, The Oval, Day 2

Having lost seven wickets at the end of the morning session, Australia resumed their innings with an aggressive intent. Smith was the more settled and the more able batsman but Starc fulfilled his role of a bowling all-rounder well, smacking boundaries through the off side when Smith was intent to defend and push around the bowling. Ali was severely punished, as 29 of Starc’s runs, including a six, were taken off 19 deliveries. Stokes, who took his wicket, was also hit for a few fours, as the left-hander reached his fifty at a better rate than a run a ball. En route, the two established the record of the highest Australian eighth wicket partnership at the venue, going past a record set in 1899. Smith dragged Finn on to depart for 143, after which Starc also departed, falling leg before wicket to Stokes. LIVE CRICKET UPDATES: England vs Australia, 5th Test, The Oval, Day 2

Stokes, Finn and Ali all took three wickets, but the more economical bowlers of the attack, Stuart Broad and Mark Wood, managed just one wicket between them. 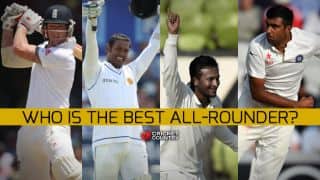 POLL: Who is the best all-rounder in Test cricket at this moment?