Australia captain Steven Smith says that he is really pleased with the way his team have scrapped throughout the tri-nation series, which involved South Africa and hosts West Indies. Australia won the final against West Indies by 58 runs, in spite of the fact that they were in trouble at one stage of the game. They were reduced to 173 for 6 in the 37th over, after which Matthew Wade scored an unbeaten 52-ball 57 to ensure that Australia had put up 270 on the board. Their bowling was led by Josh Hazlewood, who finished with figures of 5 for 50, with Mitchell Marsh too chipping in with three wickets to bowl West Indies out for 212. FULL CRICKET SCORECARD: West Indies vs Australia, Tri-Nation Series 2016 Final at Barbados

“I was pleased with the way we scrapped,” the 27-year-old said on Sunday. “I’m using that word a lot but it’s been a bit of a theme with this series… we haven’t seen many large scores, we’ve had to work hard. [Today] Wade played beautifully. I thought 270-280 was a par score on this wicket. He batted with a lot of composure and played good cricket shots. He had to bat with the tail, who stuck around and did a terrific job,” Smith said according to Cricbuzz.com. Full Updates: West Indies vs Australia, Tri-Nation Series 2016, Final

Smith also praised Marsh for his all-round effort in the last couple of games. He picked up the wickets of Marlon Samuels and Darren Bravo in the final, who have been in god form of late.

“We knew going out to field that if we just stuck it out in the middle, we’d get our opportunities and it was always going to be hard to start for a new batsman,” Smith said. “I thought with the ball, we were able to hit the lines consistently. I thought Mitchell Marsh was outstanding. His first spell… I think he bowled six overs of seven runs and had three wickets or something like that,” said the Australian captain.

“There was a patch of grass where the ball was doing a few different things. We wanted the right-armers to hit that back of a length, try and get the ball to react differently and I thought the way Mitchell used his variations today was spot on,” the 27-year-old was quoted as saying by cricket.com.au. Photos: WI vs AUS, Tri-Nation Series 2016 Final at Barbados

“He hit a beautiful area and let the ball do its thing. He got the ball through at quite good pace at times as well so it was nice to see him in good rhythm,”Smith, who fell just four runs short of his half-century added.

Smith also singled out Hazlewood, who he said was one of the team’s primary areas of improvement. Hazlewood won the man of the series for his 11 wickets, including five in the final. READ: Hazlewood’s fifer stirs AUS to victory against WI

“Josh is getting better and better every day. I think he’s comfortable in his body. He’s been on the park for a significant amount of time. That’s a start. His skill sets are outstanding. I’m really pleased for him to win the series,” Smith said.

“But we still have a lot of areas to work on. Our fielding needs a lot of work. I guess we still need to continue to start well with the ball. The last three or four series, we’ve been up against some dynamic openers who’ve got the better of us at the start. We’ve been lucky enough to pull it back in the middle overs and bowl well at the death. Hopefully as this group plays more with each other, we continue to learn each others games and continue to gel as a team.” 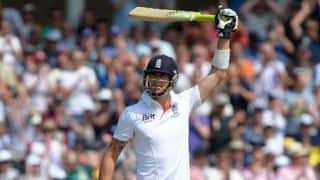